It seems as if learning the ropes on a snowboard isn't limited to just the skills but also the snowboard slang. There isn't a Duolingo or Rosetta stone option for this but don't worry, ridestore magazine has put together a comprehensive list of all the best snowboard slang.

If you’ve ever stood in a lift queue or an aprés bar and had no idea what the people around you were talking about, then this post was made just for you.  with any sport or culture, there’s a certain amount of slang and terminology associated with snowboarding which, to those on the outside, can seem baffling. But worry no more, we’ve put together a comprehensive glossary so that you can sort your “rads” from your “gnarlys” and your powder from your park rats.

Either way, whether you can keep up with the slang or not, make sure you are dressed to impress on the hill and check out our snowboard jackets and snowboard pants collection. At least you'll look cool, even if you don't sound cool! 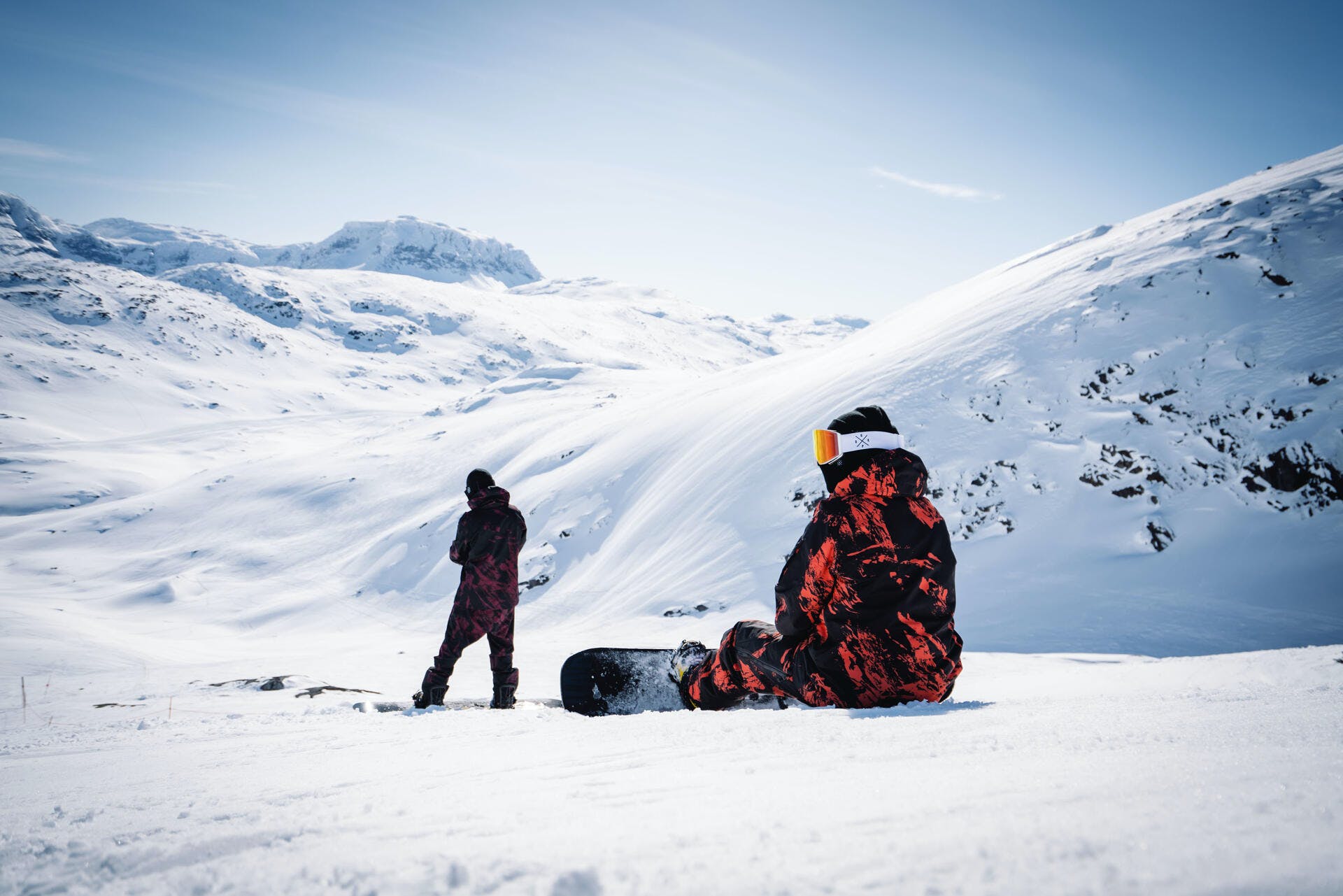 Backcountry - terrain outside of a resort’s boundaries that’s unpisted, unpatrolled and ready to explore. Bear in mind though that backcountry riding can be dangerous, so it’s experts only out there!

Freerider - a snowboarder or skier who prefers to ride off-piste. They escape the resort to find powder, peace and quiet and adventure.

First tracks - creating the first tracks down a powder field the morning after big snowfall. The holy grail for off-piste borders, and only achieved by setting your alarm, downing a coffee and getting to the front of the lift queue.

Line - the proposed route of descent down the mountain. Usually, a term used when freeriding where choosing a safe line is vital to avoid things like crevasses or dangerous terrain.

Powder/Pow/ Pow Pow - fresh, untouched, fluffy snow. What it’s all about for snowboarders.

Powder day - the day after a big snowfall where everyone rushes to get on the mountain and enjoy it. You might hear the phrase ‘There’s no friends on powder day’ used by the keenest boarders - this is serious stuff!

Powderhound - a boarder who lives to find the freshest powder and new lines.

Tracked out - a piece of off piste terrain that has been ridden to the point that there’s no fresh snow to be had. Often happens if you haven’t got up early enough on a powder day.

Whiteout - such heavy snow or bad visibility that it’s difficult or too dangerous to get down the mountain. 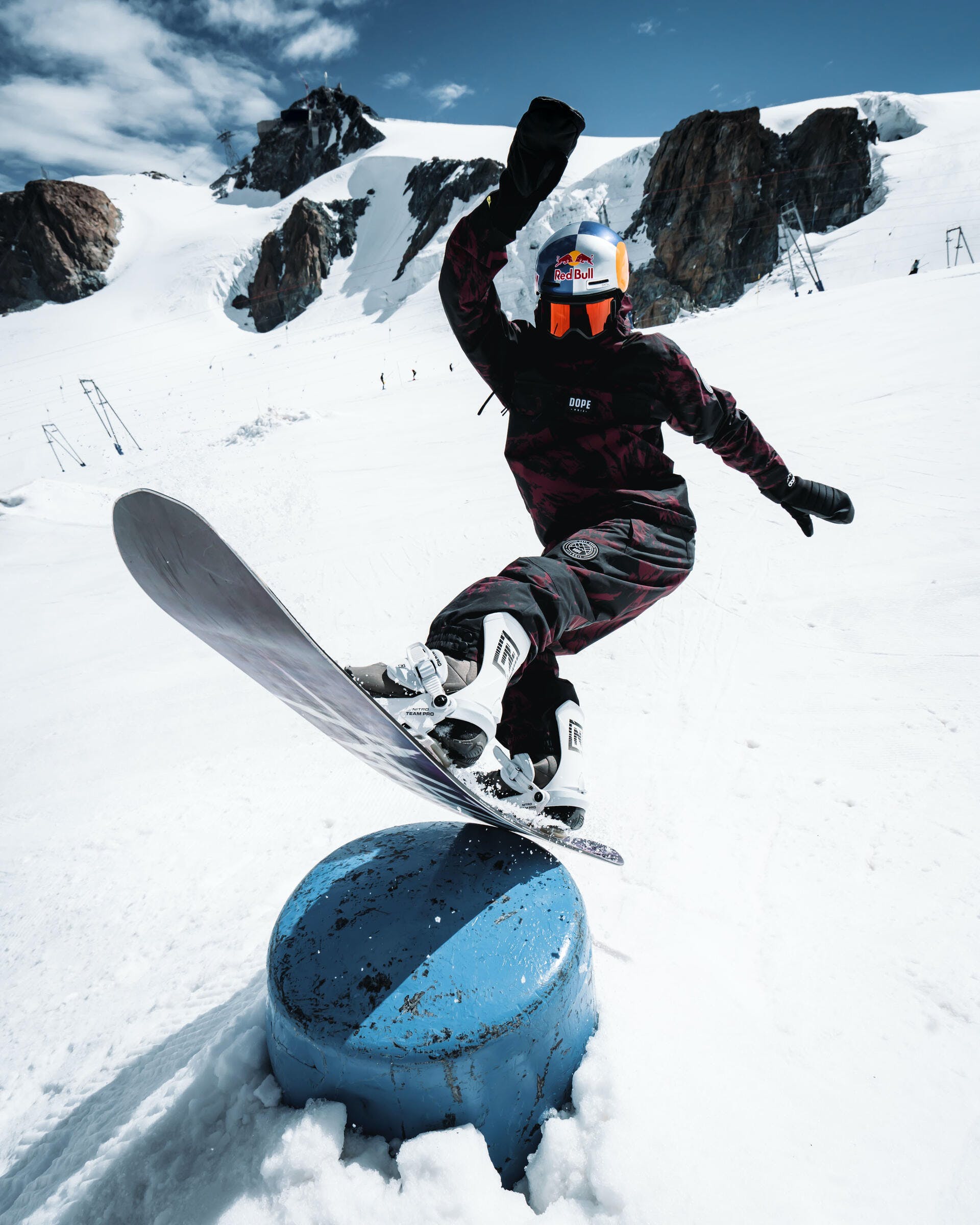 Bail - fall over, sometimes in a spectacular way or whilst attempting a trick or difficult line.

Freestyle - originally coined by snowboarders in the 1960s. Freestyle refers to a less rigid style of snowboarding which focuses on doing tricks and jumps and being creative on your board.

Jib or Jibbing - a freestyle term for jumping, sliding or popping. Basically doing fun, small tricks. Can be used as a verb, noun or adjective e.g ‘That run was so jibby!’

Hit or hitting - take on a line, piste, feature, jump or rail.

Kicker - a natural or man-made jump.

Park rat - someone who spends their entire day making laps of the park trying to perfect jumps and tricks. Often identifiable by their oversized hoodies and ski pants.

Stomp - land a jump or trick well or board a piste or line with ease. 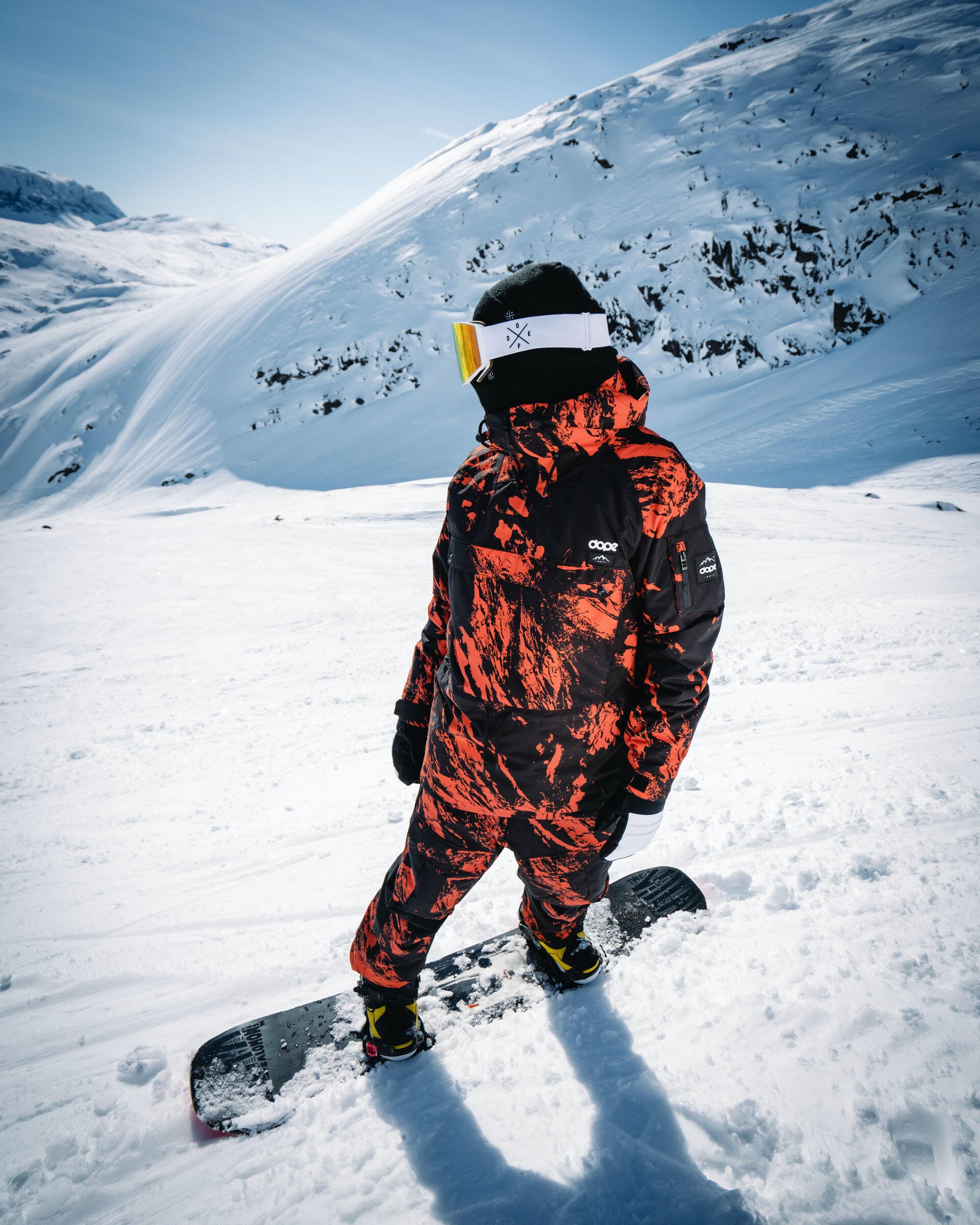 Bombing - charging at speed down a piste in an out of control or reckless way. Keep an eye out for these guys as they fly past you.

Bluebird - dream weather conditions for snowboarding. Perfect visibility, not a cloud in the sky and the chance to work on your goggle tan.

Chatter - the vibration of a snowboard or skis when moving at high speed. Chatter can be worse with a softer board and reduces contact between it and the snow which can make it harder to stay in control.

Corduroy - refers to snow that’s been freshly groomed, creating ridges which give the effect of cord fabric. A dream to board on and worth getting up for first lifts to catch before it gets churned up.

Cruising - taking it easy on your board by hitting less difficult slopes or not riding as hard. Potentially after a big night or in bad weather.

Dump - a heavy fall of snow, often overnight, which creates perfect conditions for riding the next morning.

Moguls - lumps of hard, compacted snow that form on steep pistes that aren’t often groomed as a result of repeated riders carving turns into the snow. Either great fun or a nightmare depending on your skill level.

Wipeout - yet another word for falling off your board.

Yard sale - falling so dramatically that you lose equipment in the process. If you catch an edge, face plant and lose your goggles in the process, that would be a yard sale. 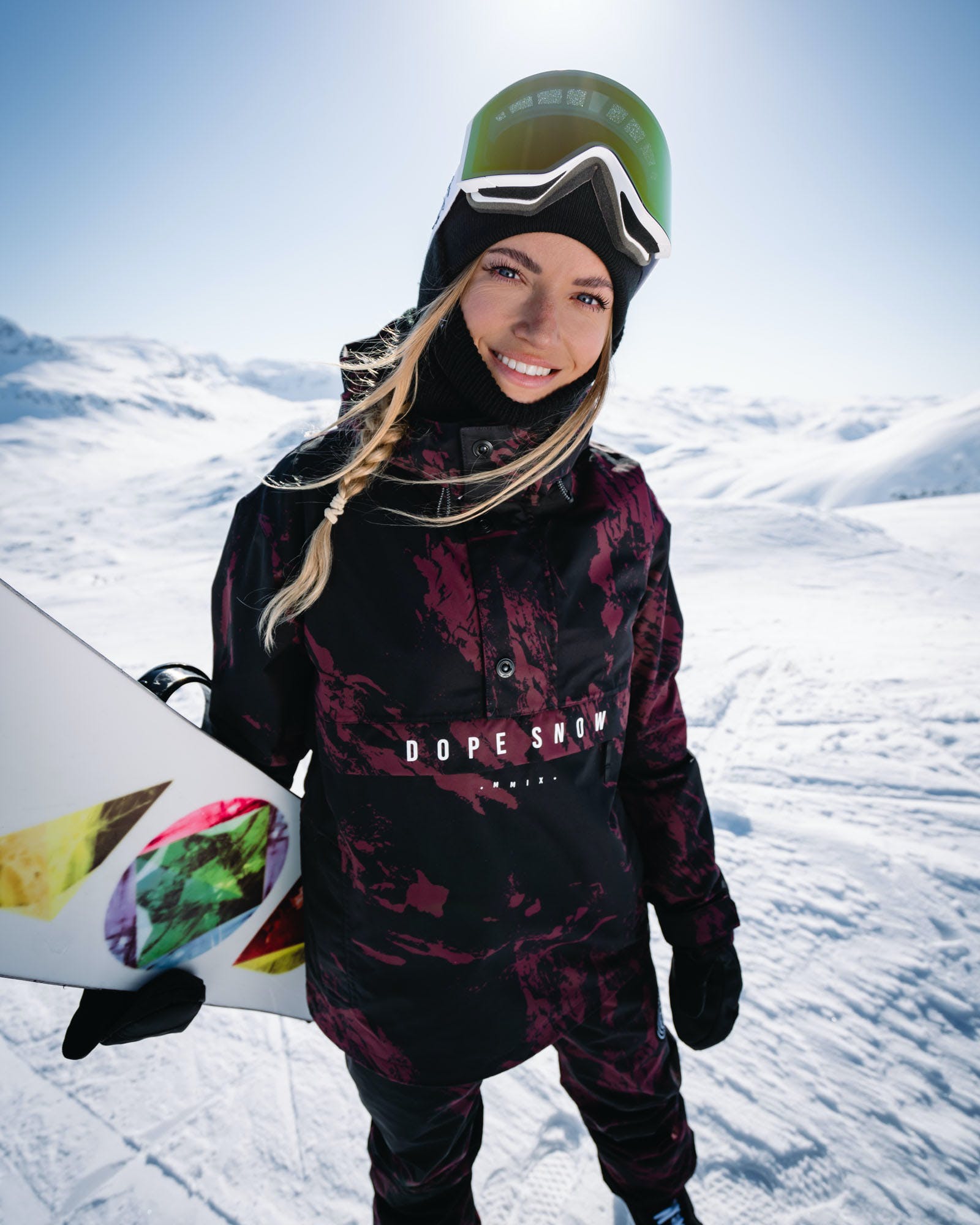 Gaper - someone who is new to the mountains and winter sports. Usually easy to identify by having committed one of the many style faux-pas of the sport, carrying their board or skis incorrectly, flapping while getting on or off a lift etc. the list goes on. Also known as a Jerry depending on which country you’re in. Resorts will often hold an annual ‘Gaper Day’ where the seasonal workers take the opportunity to dress up as gapers and get up to various alcohol-fuelled shenanigans on the mountain.

Gnarly - an old school term for something awesome, cool or potentially dangerous. Can be used both positively or negatively e.g. a gnarly line or a gnarly injury.

G.N.A.R - an acronym for Gaffney’s Numerical Assessment of Radness. A game invented by the late Shane McConkey and Robb Gaffney at Squaw Valley Resort in the US, where boarders and skiers score GNAR points are scored by doing cool stuff. Also the subject of a ski film released in 2011.

Liftie - resort worker who operates the lift system. Great people to befriend as they often have inside knowledge of the resort.

Riding - snowboarding down the hill either on or off-piste or in the park.

Steezy - style with ease. Anyone who’s cool without effort - can refer to boarding ability or fashion.

Ski bum - a seasonnaire who’s lucky/wealthy enough not to have to work during the season. Giving them unlimited time to ride, drink and sleep.

It’s strange that we haven’t heard back from Oxford English Dictionary yet about our entry petition for all these words. We thought it might be cool to have an entire chapter in the dictionary dedicated to snowboarding slang but alas, our emails must have ended up in the junk folder. We do hope that at least you, our fearless reader finds this interesting ad you can put your new language to use! Good luck out there.