Let's dive in and discover how to navigate the fun and imaginative world of snowboard trick names. It's like another language but Ridestore has deciphered all the phrases for you!

There are so many apps for learning another language, certainly helpful when it comes to ordering at apres-ski, however, there's nothing out there to help you learn all the snowboarding lingo. You end up looking like a real gaper. So how do you avoid the embarrassment? Well, never fear as we have put together a list of snowboard trick names to bring you up to speed.

You’re hanging out with your crew in the snow park, testing your skills, showing off on the kickers and the box, you probably look pretty damn cool. It’s all well and good you nailing the landing, but what will really impress is your terminology, proving you’ve got the skills and the brains. Knowing your snowboard trick names, we guarantee you, will elevate your snowpark game this season. Sit down, grab a tea, get your reading glass on and your notepad at the ready, it’s time to get swotting up on the technical names of those epic tricks, from the basics to the master class. 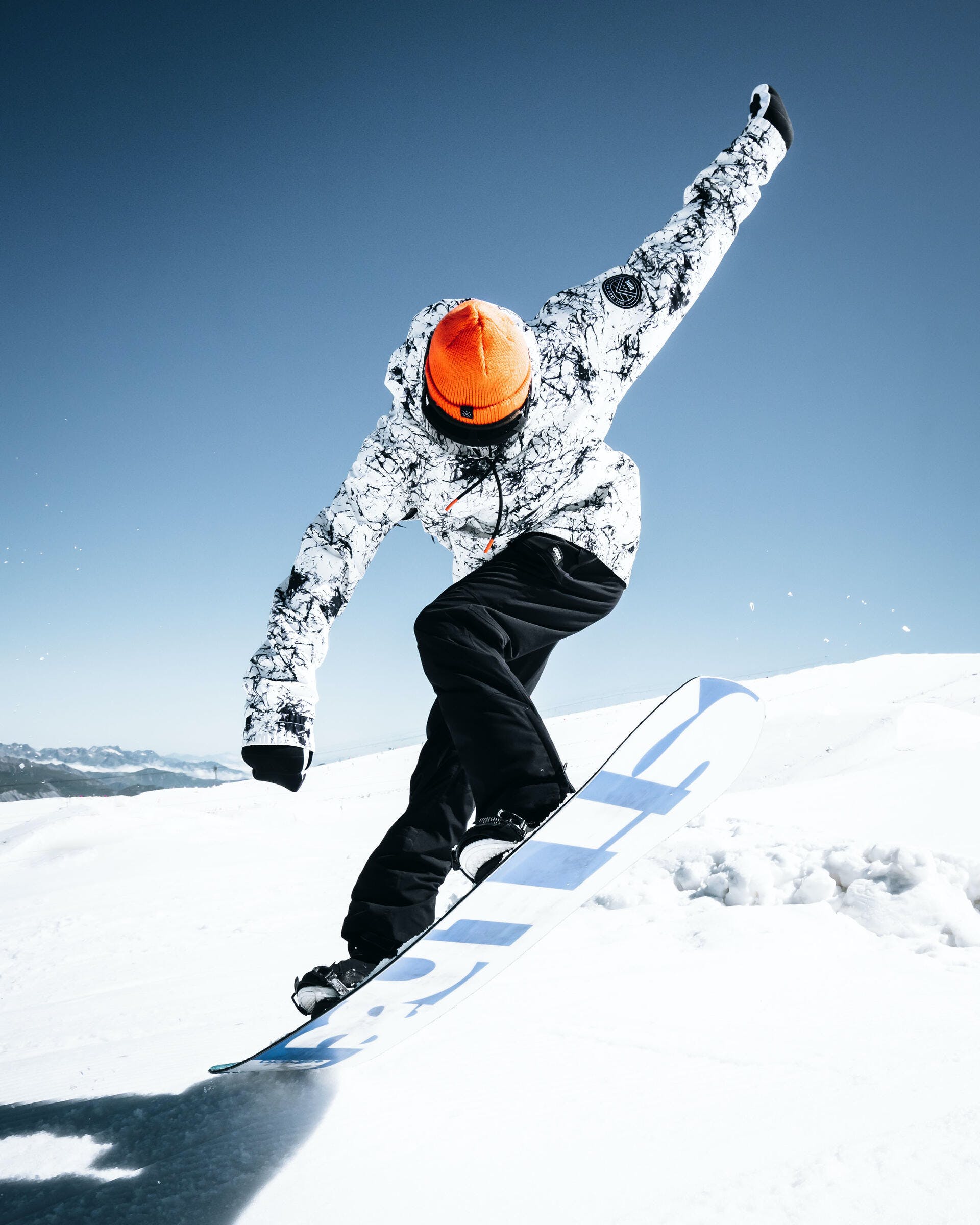 Next season, you will hit the park, an air of confidence about you. You will have the coolest snowboard jacket and snowboard pants, a sweet board and an air of authority that will naturally come from your newfound expertise. Hitting the big jumps, pulling an Indy grab, landing a frontside 360 and sliding straight into a silky press on the rail. Settle in, class has begun.

A jib is one of your basic skills, that essentially is the baseline for most park tricks. Jibbing is riding, jumping or sliding the board across anything that isn’t a pisted surface, for example, on a rail, a bench or a log.

A tail press is riding along a flat surface and switching your weight to your back leg while lifting your front leg slightly, which will then lift the front of the board. Whilst a nose press is the opposite, where the weight is shifted into the front leg and the back of the board is bending upwards. This is a classic, but basic trick that makes any boarder look steezy. 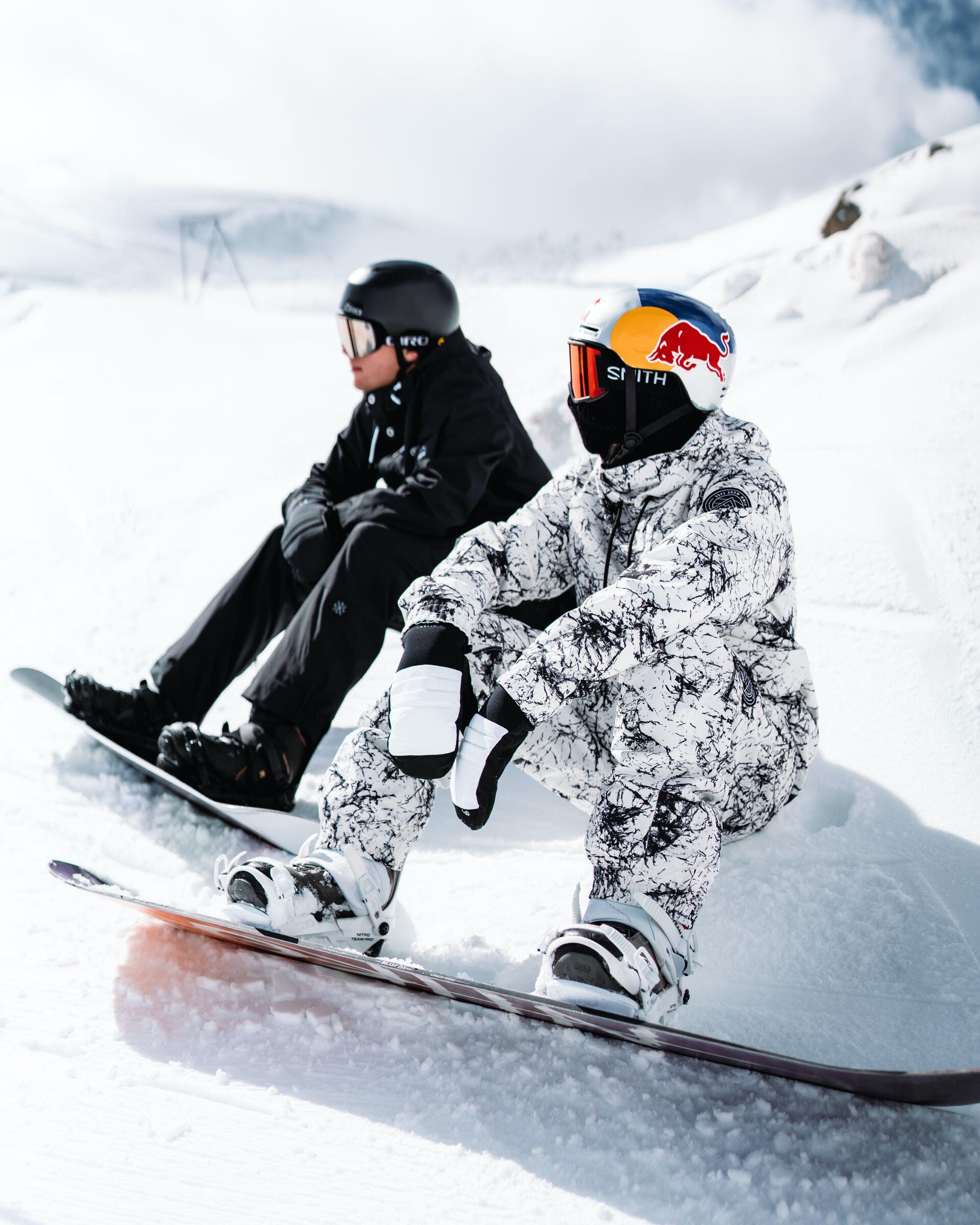 Another one of the basics of tricks in snowboarding is being able to rotate, whether that be on snow or high in the air. A frontside is where you are rotating so your heels lead and rotate in an anti-clockwise motion. Whilst a backside is rotating clockwise, so your toes lead and switch your leading leg. All rotation tricks in snowboarding are put into degrees, so you may continue doing a frontside rotation, for example, spinning in a full circle for 360 degrees or even 720 degrees and so on. But if you ride Goofy, it’s another story! 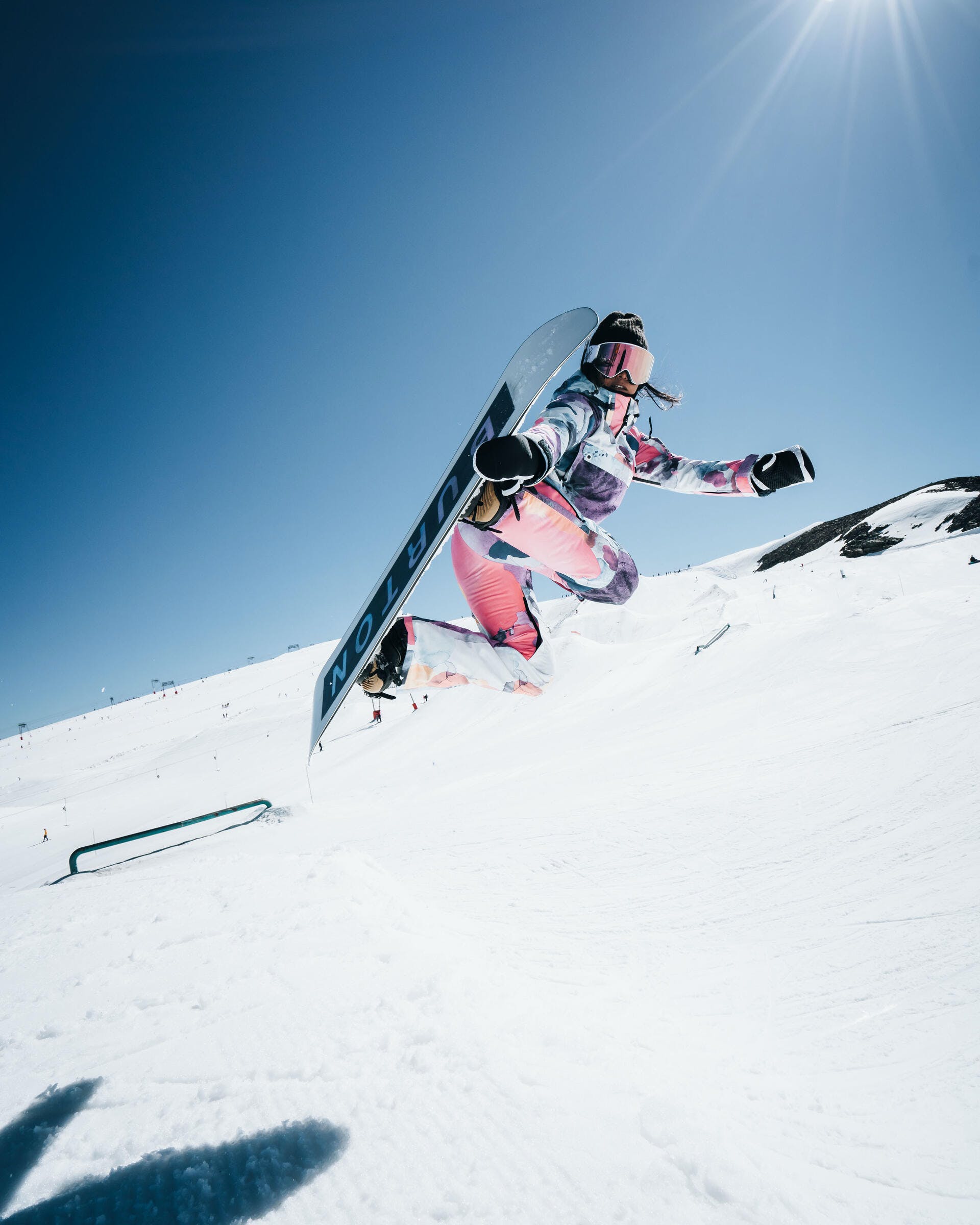 A butter is another term that is the basis of many tricks, so nailing this is obviously a must. This is where either your nose or tail of the board is raised up in the air, whilst the rest of the board remains in contact with the snow, allowing you to do spin variations whilst travelling. It’s time to get creative, with your snowboard slang and your butters, step out of your comfort zone and you will look effortlessly slick on the slopes.

Once you start to get some height on your tricks, you can show off just how comfortable you are on the board and make it look easy by doing an Indy. An Indy is once you have taken off from a kicker and mid-flight, most likely using the ollie technique, (so your weight is on the back leg) bend your front leg some more and grab the toe edge of the board between the bindings. It’s all in the smooth release of the Indy grab, which will ensure you let go in time to land like a boss. 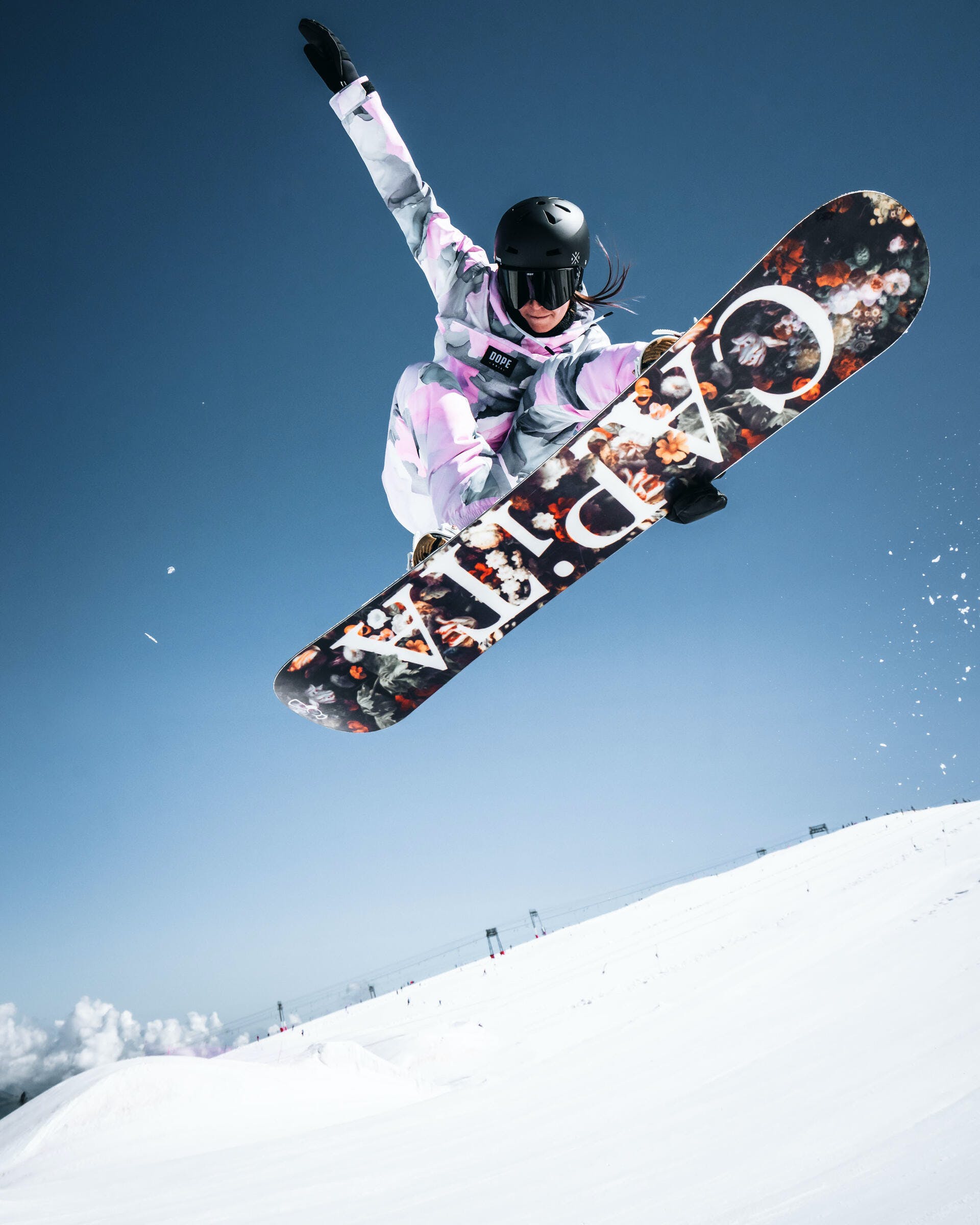 An Indy grab is the beginning of your board grabbing techniques, and there are many more to learn, but for those who are looking to impress, give the Tail Grab a go as the next step. This is grabbing the board on its tail end when you’re in mid-flight of a jump, simple as that (or not so simple, but nobody will suspect a thing).

A backflip, of course, is one of the more self-explanatory snowboard trick names, but it’s one to note because it’s so damn cool and impressive. It’s in the name, but basically, once you hit a kicker and get enough air and momentum, you throw your weight back so that you flip backwards, making sure to release the legs at the right time to land. You have probably had a few nasty accidents getting this perfected, but worth it once you see the faces and cheers of your spectators. 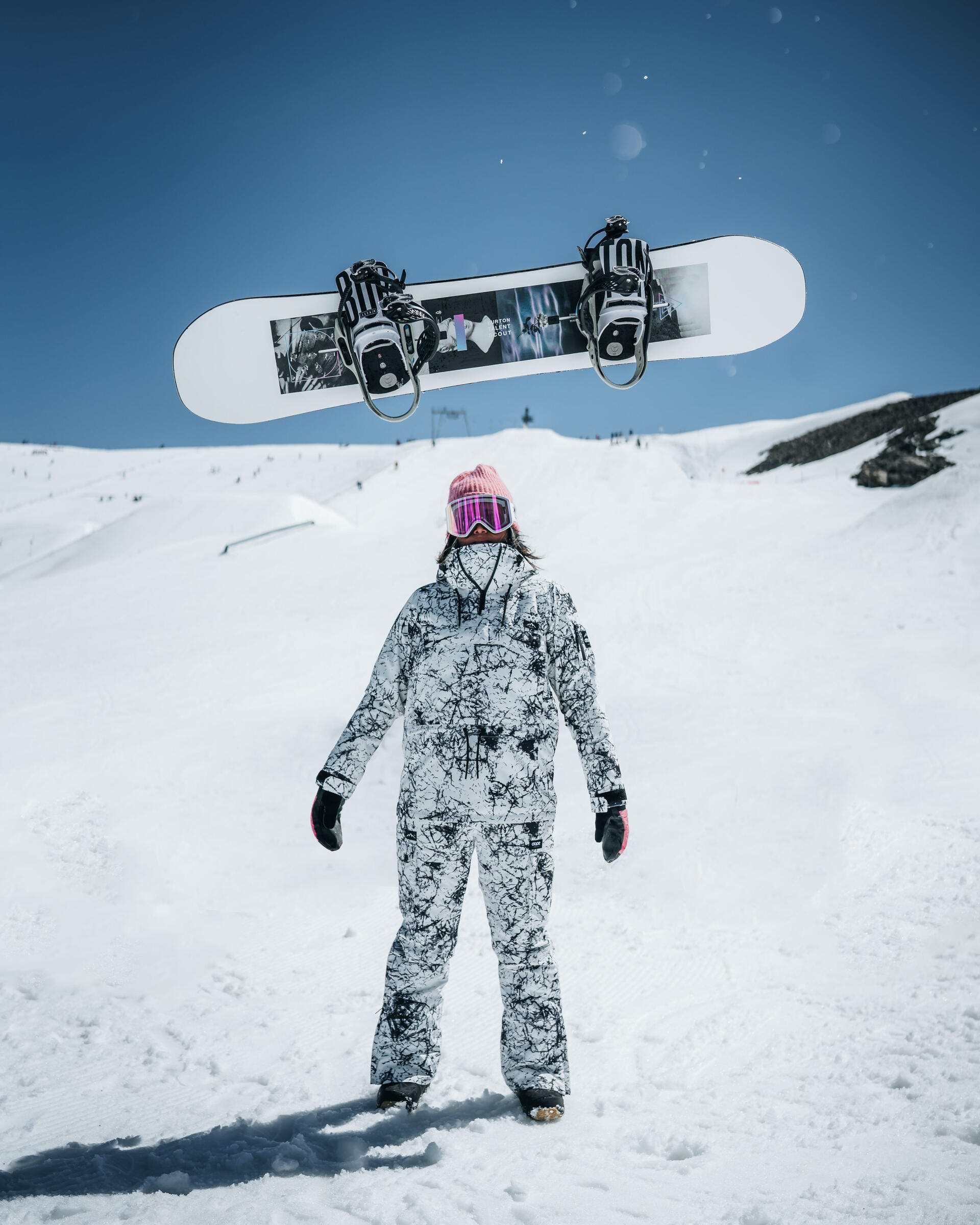 The cork is an advanced variation of a rotation, where you are not just spinning upright, but your body is actually spinning off-axis. Mid-jump you may do a frontside or backside 360 whilst your legs and board rotate upwards, so your upper body is below your board. For experts out there, performing corks will have you rotating upside down, which is pretty wild and difficult to comprehend.

Most of the snowboard tricks and names essentially come off variations and multiplying degrees of 360s. You can do it all frontside, backside, rotating upright, upside down, backwards, forwards and so on, the possibilities are endless. Now you can stand at the top of the park, speaking knowledgeably about snowboard tricks. Regardless of whether you can do them or not, people will be impressed and you can be smug. Class dismissed, now go enjoy your park sessions a little wiser than you were before.