What are the four main snowboard types?

In life, there are some existential questions, one being, what are the four main snowboard types? Never fear, we will provide you with the answers to life's big questions!

You may be new to the sport, or pretty experienced, but either way, learning a little more about this weird and wonderful pass time is never a bad thing. And what better place to start than with the snowboard, eh?

Now it would be easy to think that a snowboard is just a snowboard. It’s a piece of wood that slides on snow. It’s got two bindings for your feet. And it’s much easier to ride lengthways than sideways. All true! But there’s some more nuance at work here, and a big part of what makes a board fun to ride on groomers, a beast in the park, or a floaty dream in the pow, is the board’s shape.

We’ve split snowboards into the four basic shapes, and covered them below so that you can add a little more knowledge to your riding this year, and make the right call when it comes time for your next upgrade. 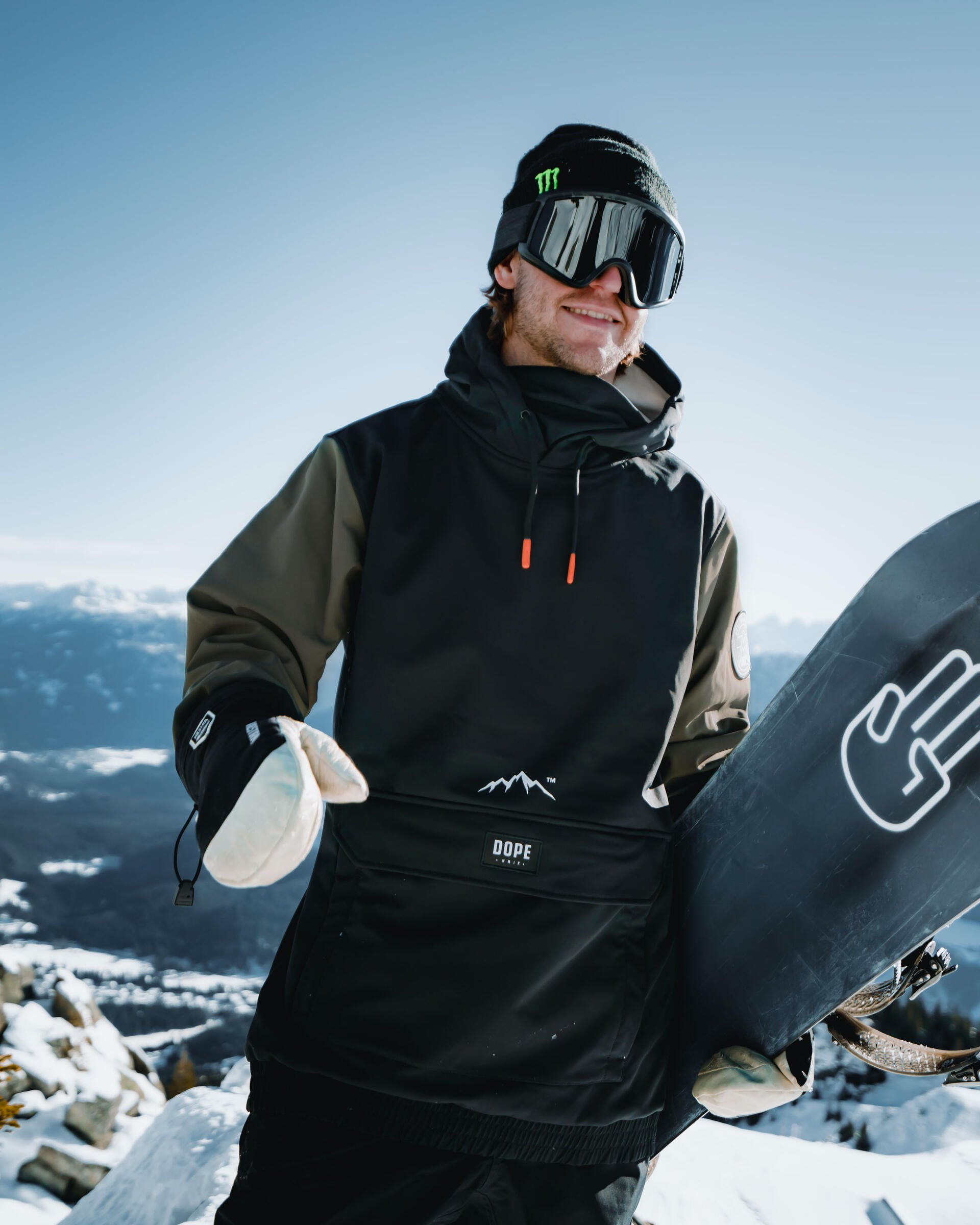 Pssst: Still looking for new snowboard styles for the upcoming season? Make sure to check out our functional snowboard jackets at Ridestore.

Snowboarding has come a very long way since its inception some four decades ago (and some change), and in that time, the types of snowboarding have diversified greatly. From charging the steep and powdery faces of the Alaskan Rockies and the high Himalayas to jibbing it out on the streets of Helsinki.

There are pros pushing the very limits of the sport in every direction, and board construction and design has followed these trends, bringing both specialist and general weapons of slush destruction to the wider market.

So then how, in such a vastly diverse world of snowboarding, can we categorise these miraculous pieces of equipment? Well, the good news is that we can! It comes down to what sort of riding you like to do mostly.

We’re going to cover the four basic types of snowboards you’ll find when looking at the new season’s offerings from all the brands. And hopefully, by the end of it, will be that one step closer to becoming a snowboard nerd. Just like us! 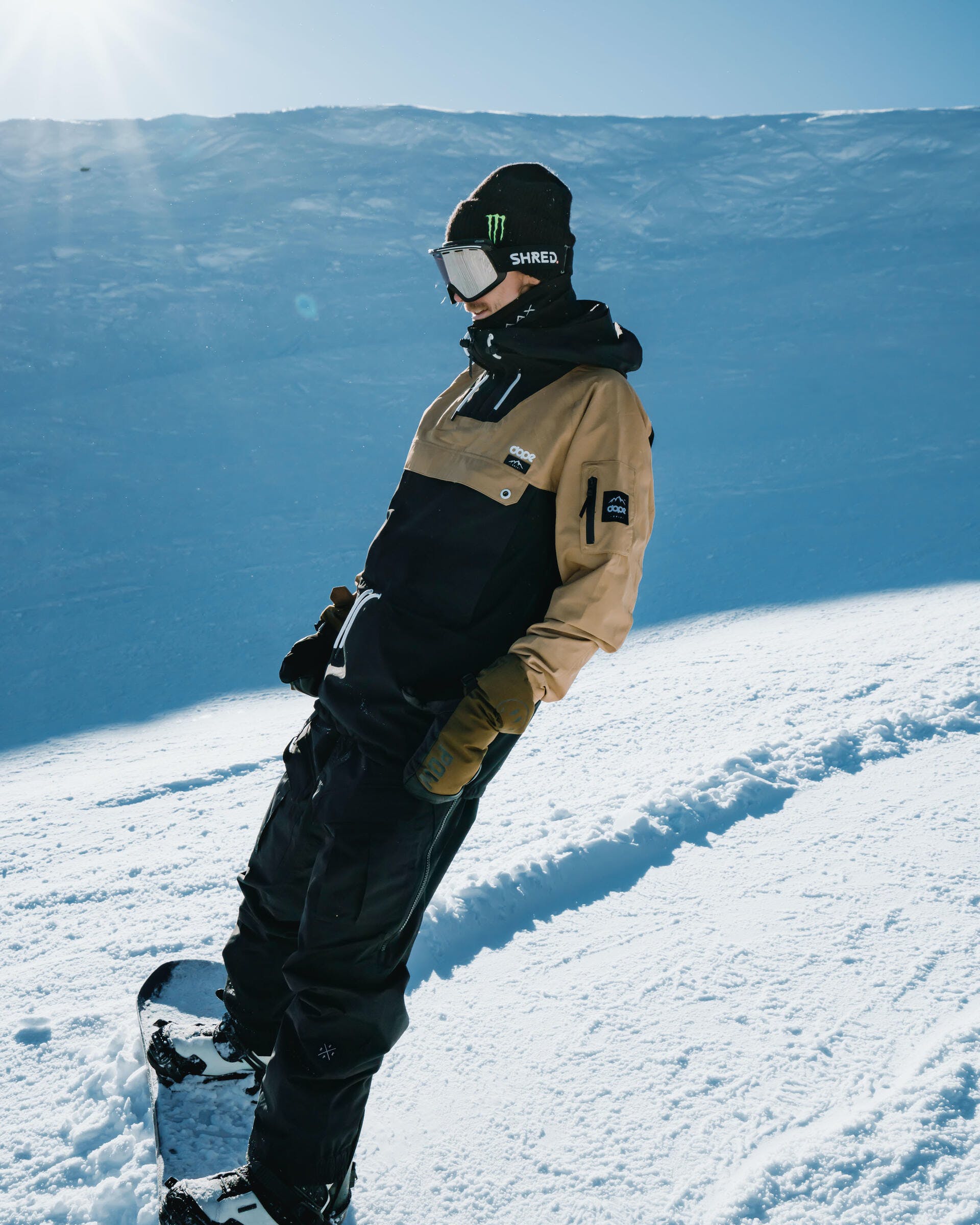 All-mountain boards - one size fits all

The All-Mountain snowboard is truly your one-size-fits-all sort of deal. Recommended for seasonaires or for those looking to ride everything on one board, these decks are often called quiver-killers because they do their very best to eliminate the need to have multiple boards.

Generally these boards tend to be true-twin or directional-twin shapes, with even flex patterns and a mid-flexing stiffness. They deliver a really consistent riding experience, and more often than not have a hybrid-camber or mild-camber profile, which is designed to allow you to remain in control and comfortable everywhere you go. They offer up a more forgiving ride than more aggressively cambered boards and are great to learn on.

Every brand has their flagship ride-everything board, from the Burton Custom to the Salomon Assassin, these boards have come on leaps and bounds in recent years and are some of the biggest selling boards around.

With a mid-flex and mild/hybrid-camber profile, they’re going to give you good control on the groomed slope, won’t fight you too hard to get your nose up in the powder, and will perform in the park too, making them an ideal choice as a first snowboard, or as your next choice if you want one board to rule them all. 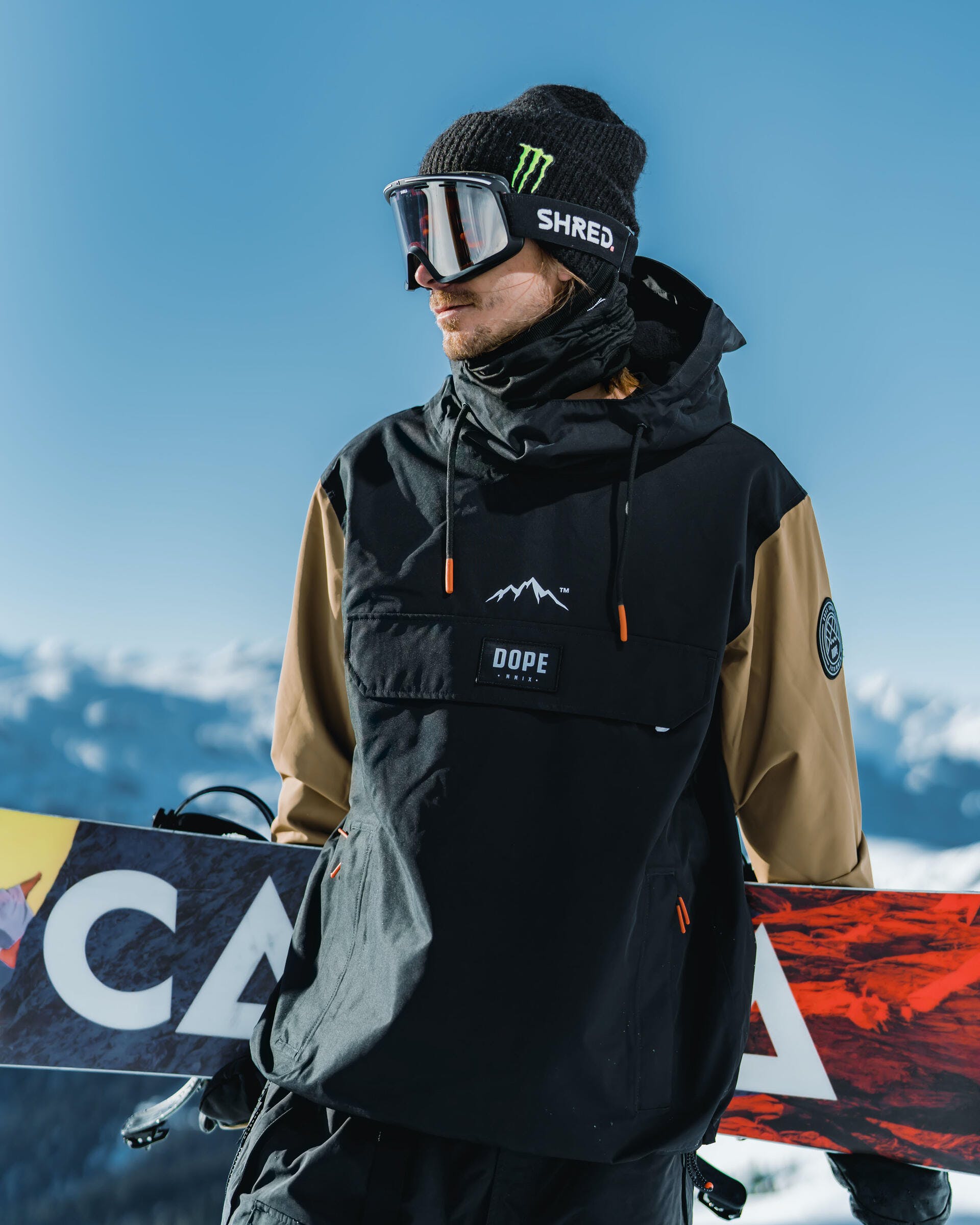 The differences between an all-mountain and an all-mountain freestyle board are subtle, if not blurry. Usually, the core difference with these boards is that they feature a slightly more aggressive camber profile that leans from a truly hybridised camber profile into something that’s more predominantly cambered. This makes them less forgiving generally, but better suited to freestyle and park riding.

Now what that means is that it will rise up more between your feet, so your ‘contact points’ — which are the widest parts of the snowboard just before the tip and tail — are the parts of the board touching the snow when there’s no weight on it.

Now what this does is, when you’re riding, load the board with more energy than those without that rise between the feet, which gives you more ‘pop’ when ollying off features. This poppiness helps with park riding, and a deeper camber profile also makes locking into rails easier, and also helps with turn initiation and control. Something you need when riding more park than pow!

Still designed to do it all, but with a heavier focus on park riding than powder, popular AMF boards include the Capita DOA (the best-selling board in the world) and the Rome Agent, as well as the Burton Process. 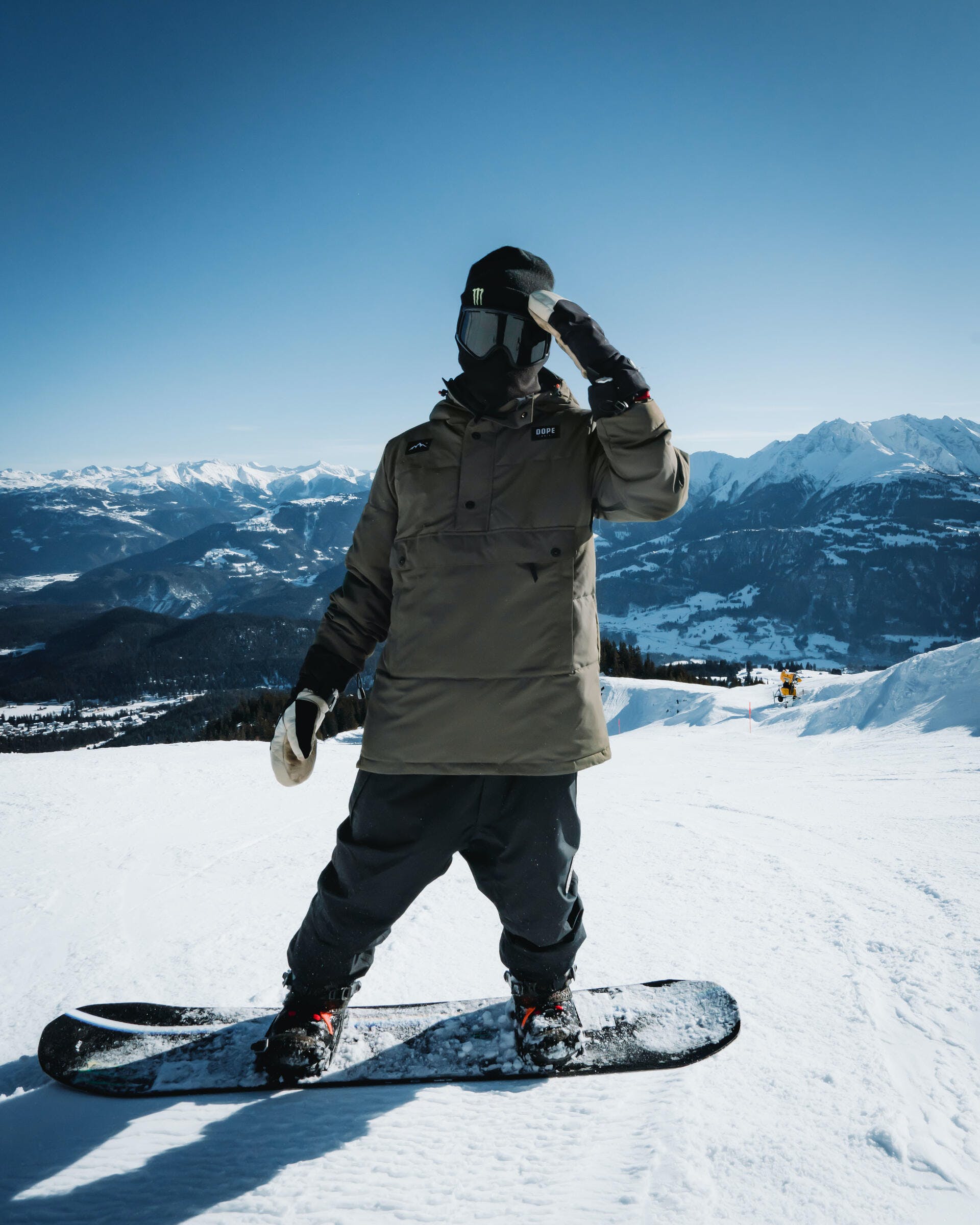 The Freestyle-specific snowboard is a true-twin snowboard with an even flex-pattern, meaning it rides exactly the same both normal and switch. So, that means riding with your leading foot pointing forward, or with it pointing backwards, so in both directions.

They’ll also have a full or classic camber profile, meaning no rocker or flat sections at the tip and tail, just lots of rise between the feet for maximum energy transfer, pop, hold on rails, and quick and precise turn initiation — which is necessary for last-second adjustments before hitting jumps and features, or for really holding the snow when initiating rotation.

Some popular park or freestyle specific boards include the Burton Paramount and the Nitro Team.

Much less forgiving than an all-mountain board, these are designed to throw you into the air, and cushion your landing when you come down. However, there are some anomalies even within this more ‘specific’ board type.

The rocker revolution takes freestyle boards away from camber into the rocker end of the spectrum, which means full rise at the tip and tail, perfect for the rider who loves to butter. This craze was started, and is still perpetuated by the LibTech Skate Banana as it offers a catch-free and super loose ride that feels more like surfing than riding on snow. So you know, there’s something for everyone, even here. 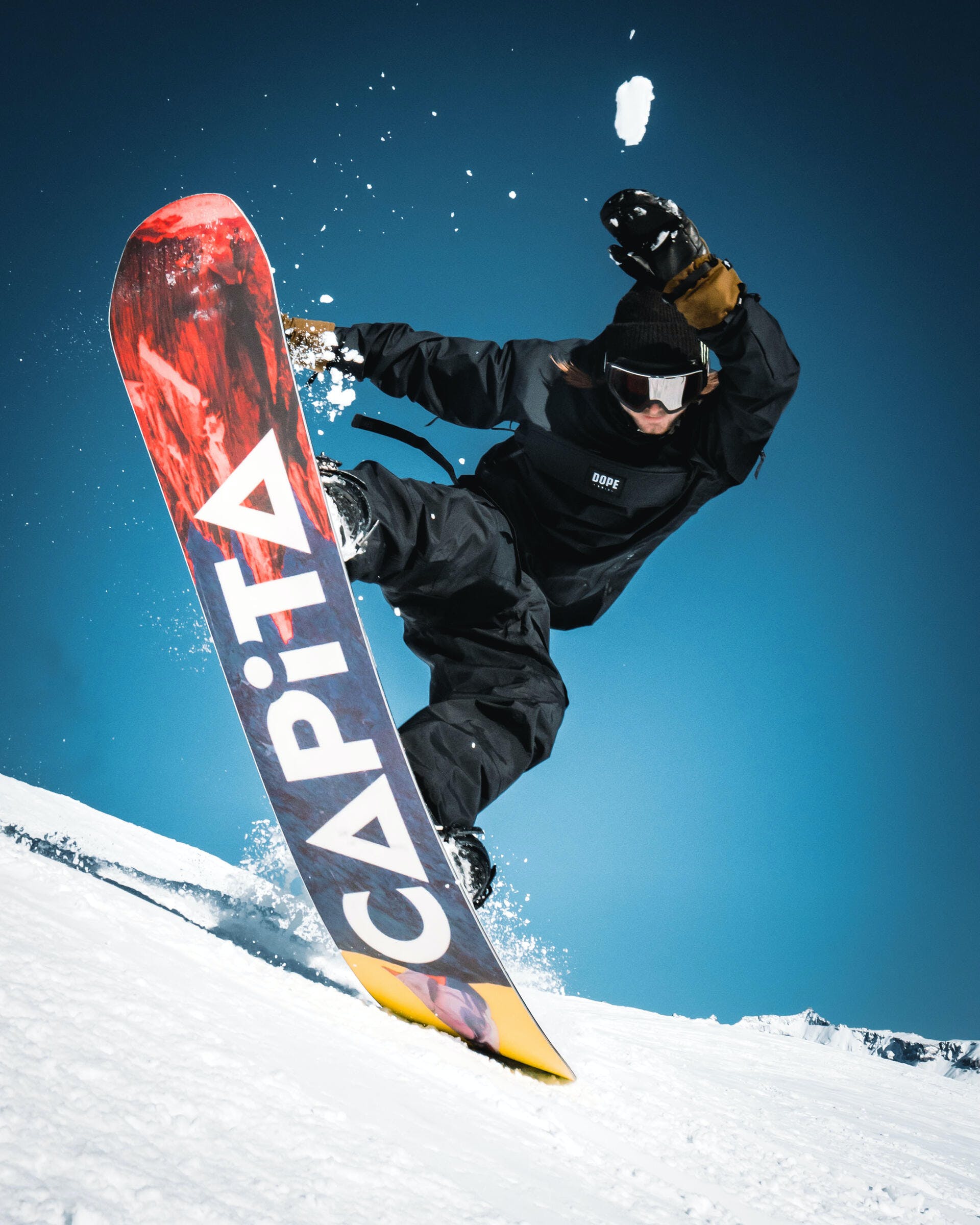 Freeride, powder, and backcountry snowboards - the steep and the deep

When it comes to freeride and backcountry boards, it’s important to consider how they overlap with the other types of snowboards we’ve covered here. This is the broadest category by far so let’s just cover some ground, eh?

These boards are directional boards for the most part with an a-symmetrical flex pattern, which means that the nose and the tail will both look and feel different. A longer nose and shorter tail which is usually more flexible behind the back foot allows you to lean back with greater ease and dig the back-end into the snow. This creates lift at the front, and allows you to surf on top of the powder, rather than ploughing through it!

However, beyond that, the shape and the way that they ride can be totally different. Something like the Nitro Cannon is a 2m+ boat with a huge swallow-tail. This is designed for a really playful experience that requires little effort on the part of the rider to keep the board surfing. The swallow-tail reduces surface area and allows for more sink at the back whereas the long nose keeps you out of the deep stuff. These kinds of boards often have less control than something like the Jones Hovercraft, which is closer to the all-mountain boards above.

Still featuring that long front and short back, the Hovercraft will make powder-riding much easier, but will also allow you more versatility and maneuverability around the mountain. These, however, are just two of the many boards out there designed to dominate the off-piste. But like all the types in this article, each deserves a full article of its own to really dig into the nitty-gritty. All you need to know is that if you’re doing most of you’re riding outside the bounds of the resort, then a freeride or powder board may be a good investment. 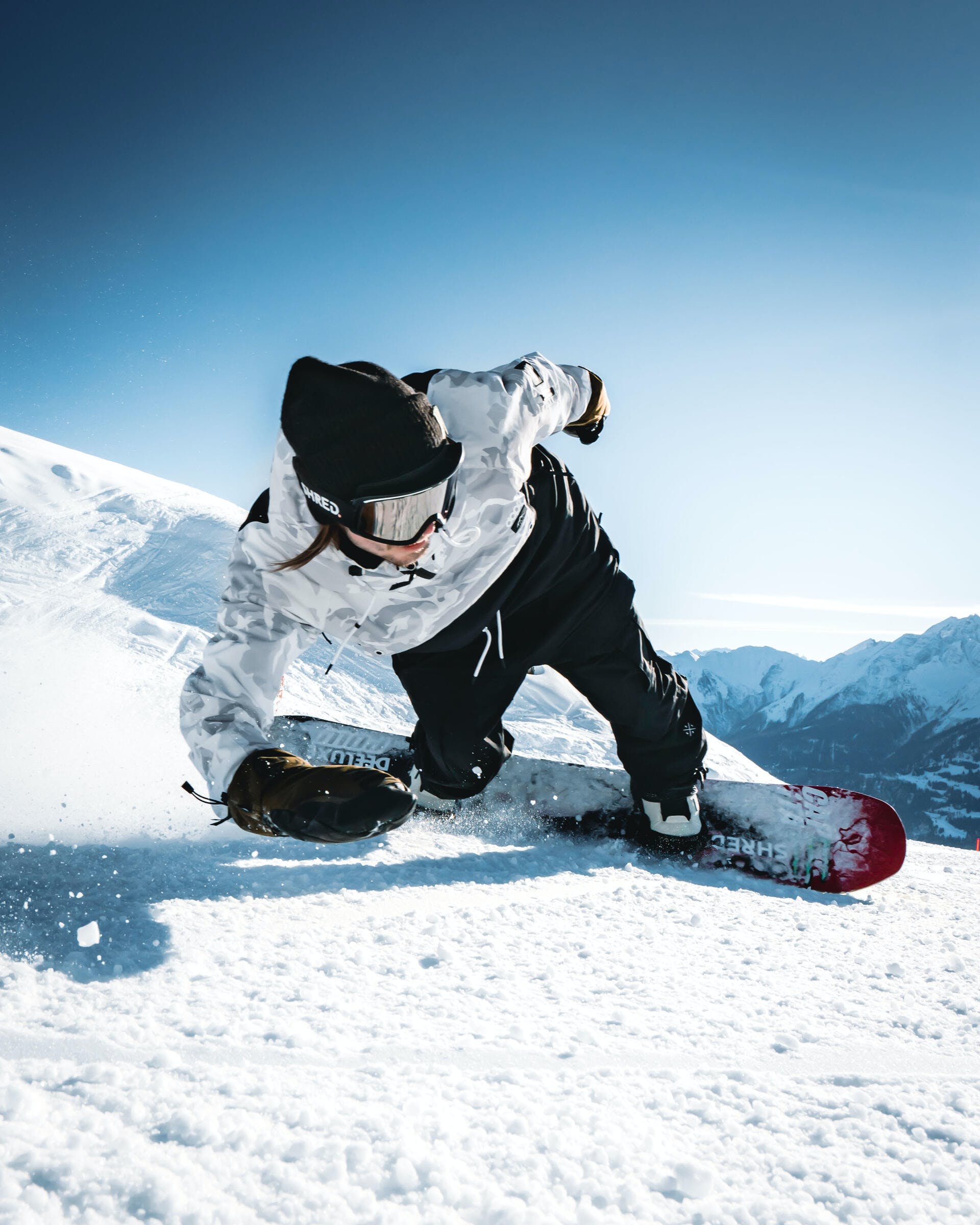 Which is best? This is always their final question. But there’s no right answer. Depending on your riding style, there’s always a best ‘suited’ option. But for the rider who wants to do everything, the All-Mountain board, the most common out there in the world, is a strong choice.

But hey, there are dozens of companies making snowboards, and with the industry as it is - as competitive as it is- so long as you choose the right type, you’re going to have a blast. So stop stressing, make your choice, and go ride, dude! That’s what it’s all about.

Daniel
I'm Dan. I love to snowboard, mountain bike, and write, too! I handle all the product articles and nerdy stuff here and I love digging into the nitty-gritty of what makes snow gear great. If you need me, just follow the sound of classic rock and the smell of fresh coffee.
Buyers GuidesGear GuidesTravelTips
Info
ContactTerms & ConditionsPrivacy Policy
About
Editorial TeamAbout UsWork with usShop
Social Media
© 2022 Ridestore AB. All rights reserved