The best ski resorts are near Munich? We hear you ask?- why yes, and we’re here to give you the very best of them all within 2 hours of the city. Hear us out...

What we do know is that Germany is jam-packed full of vibrant cities with tradition and culture bursting out the seams; Munich is no exception to this rule. In southern Germany, nestled into the historical state of Bavaria stands this charming city. You head to Munich for its famous Oktoberfest and its neo-gothic architecture. But if you put down the beer for a second, and look further afield than the historic cathedral walls, you will see the magical snow-capped peaks of the Bavarian or Tyrolean Alps. 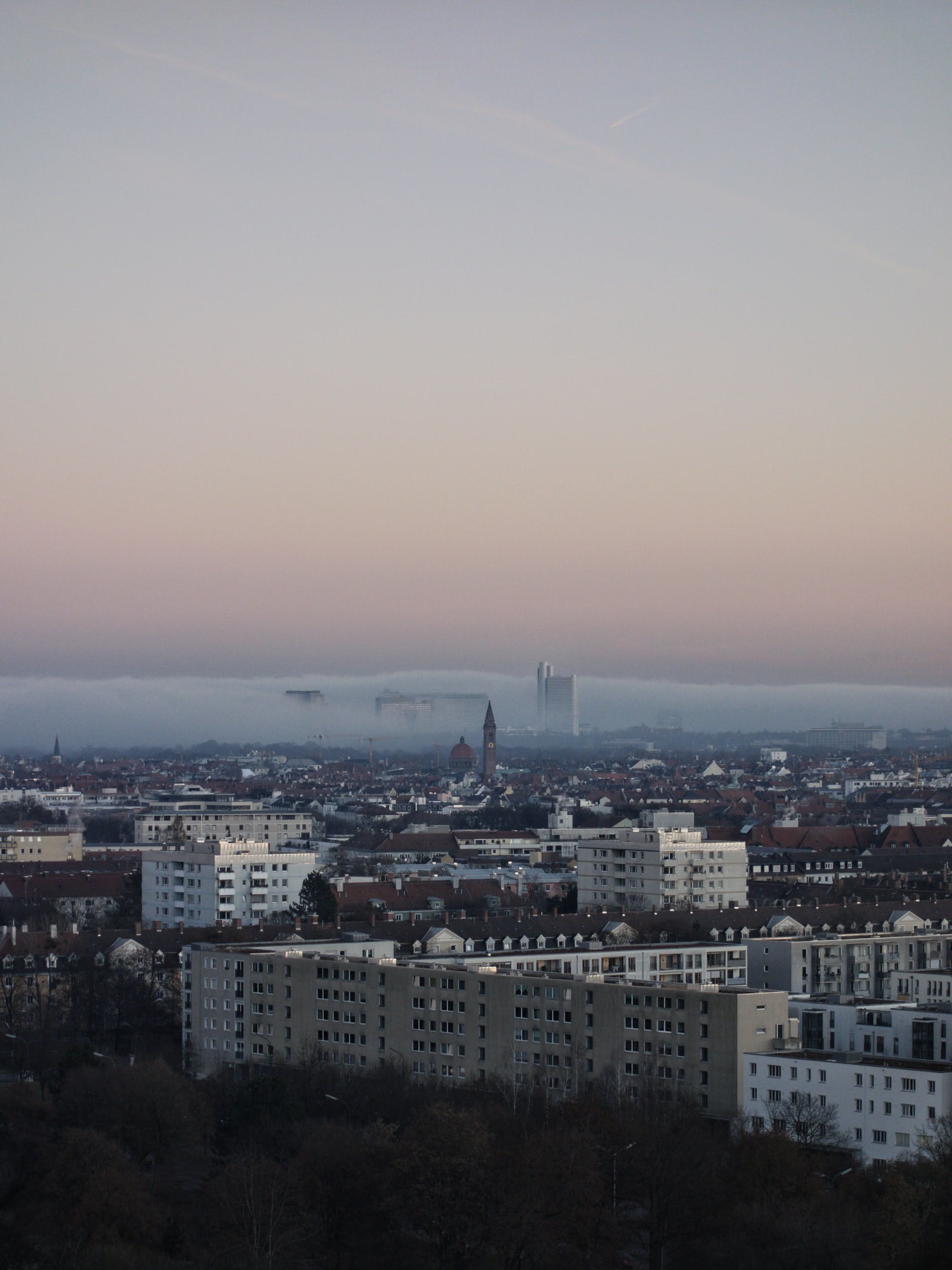 What many don’t realise is that in just over an hour from the city there is an abundance of snowy mountains and idyllic ski resorts to choose from. Within just 70 minutes you can be hitting the slopes of the Bavarian Alps or within 90 minutes you can be hitting the apres bars in Austria. To paint the picture; you check the weather at 8 am to see a huge dump from the night before and can be on the slopes by 10 am. Or you pack the car up on a Friday evening and do a big weekend in the mountains to be back in Munich for Monday morning. The possibilities are endless, but either way don’t just limit yourself to the beauty of the city walls – make sure you  grab your friends (and a couple of stylish ski jackets and ski pants) and explore the best nature has to offer. 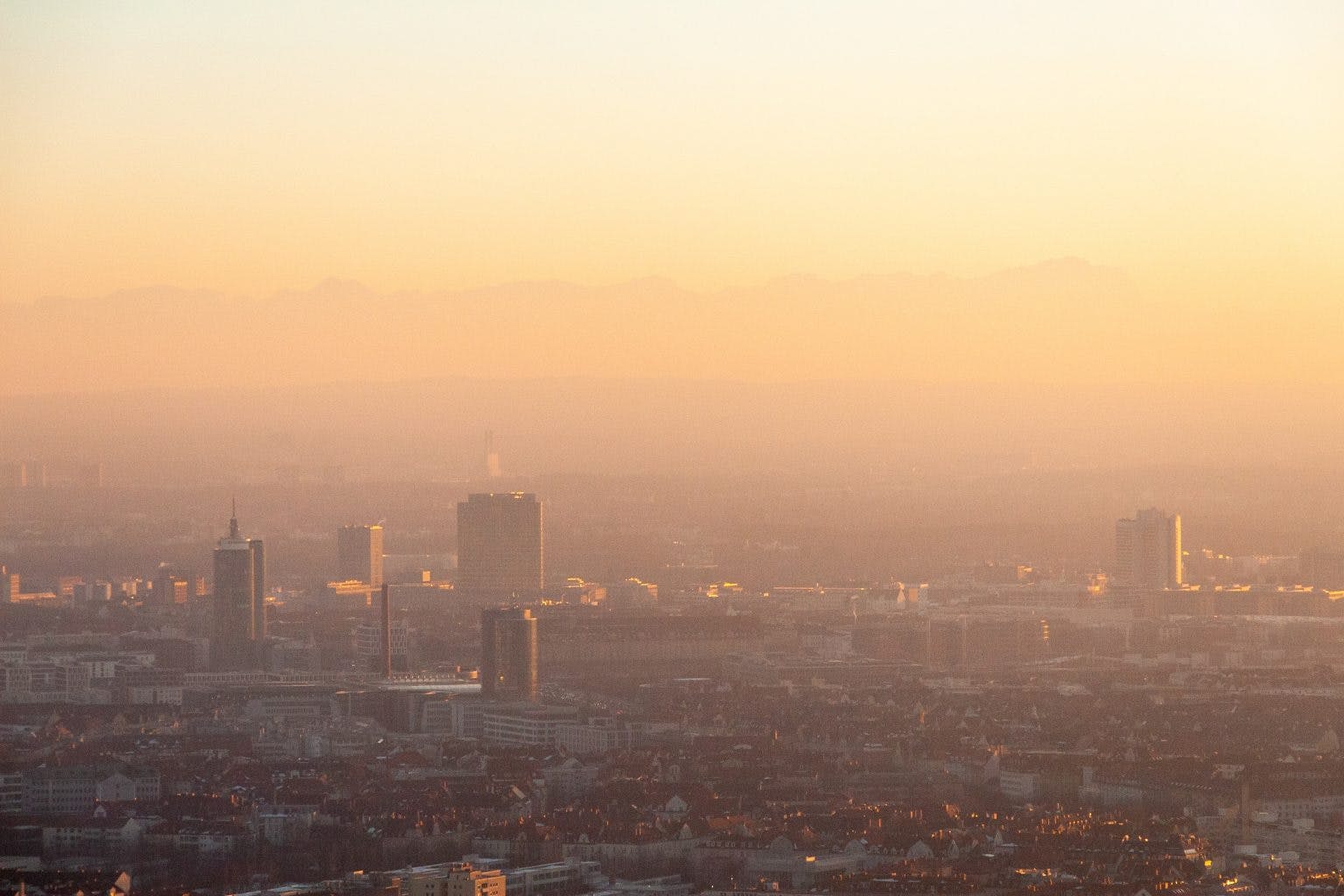 Munich airport is about 40 minutes north of the city, with amazing public transport links to get straight from the airport to the centre. There is the railway that takes 40 minutes or scheduled bus services, so it really couldn’t be simpler. If you are flying into Munich and heading to the snow, our recommendation is to spend a couple of days in the city as you have to essentially drive through the city, to head south to the mountains.

From the airport to either the Bavarian Alps or Austria, you can easily hire a car, book a private transfer or get on the many buses that take you straight to resorts. Some resorts even have train stations, such as Zugspitze which you can easily get to from Munich central station.

If you are taking a European road trip, Munich is perfectly located to access easily from Paris in under 8 hours, or within 5 hours from Vienna and even driving from London gets you there in less than a day.

Ski resorts near Munich-
1 hour away 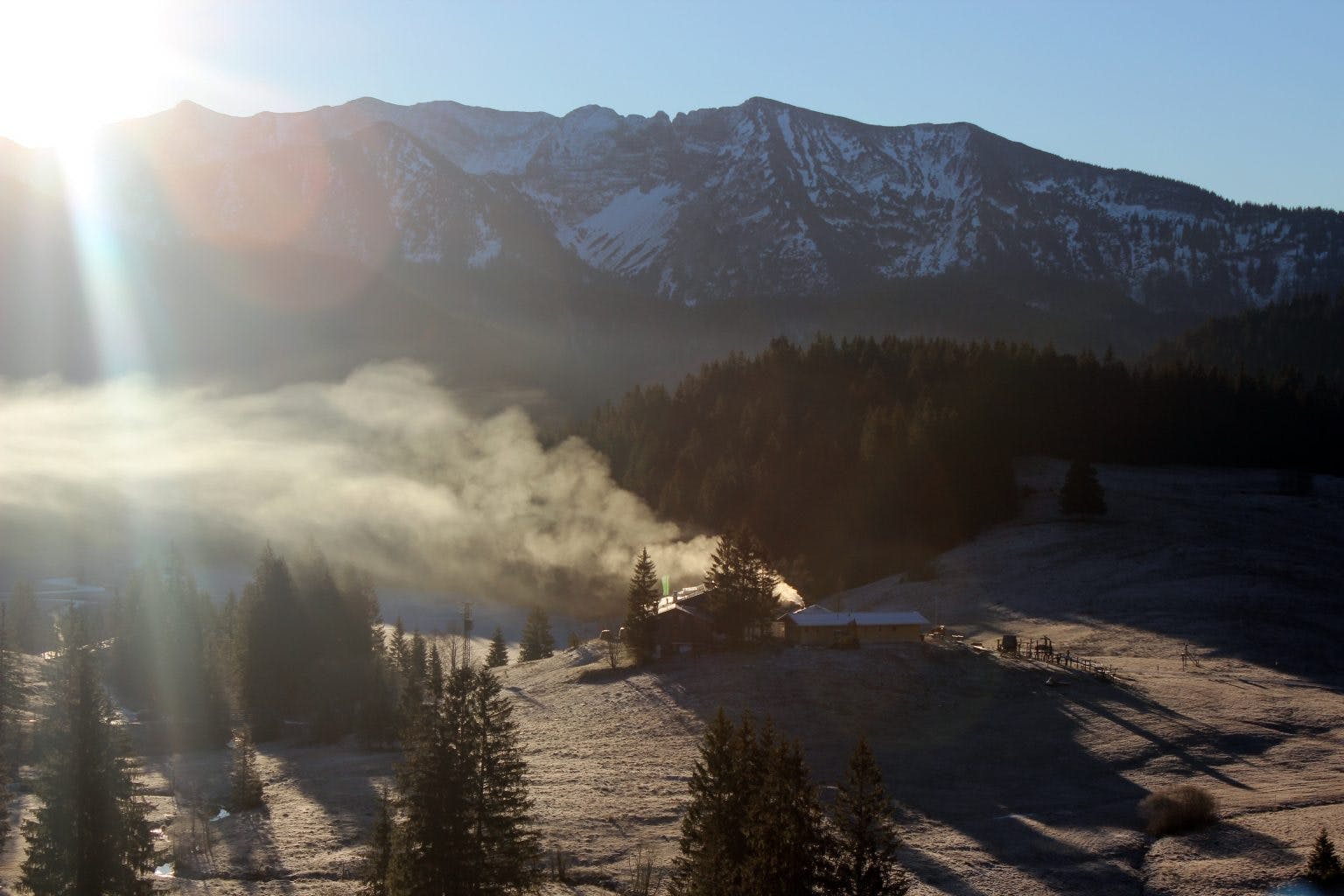 Just over an hour from Munich, you get to the incredible Alpine Region of Tegernsee- Schliersee, which has multiple resorts within the area. Spitzingsee – Tegernsee is your cosy, cute and traditional Bavarian wonderland to take the family on a wholesome trip. There is plenty of slopes for the little ones and the learners, but the intermediates and experts will enjoy the modern snowmaking facilities and the park. If you find yourself completing the slopes, there are plenty of cross country trails to get stuck into, as well as the discontinued resort on the other side of the lake, which will offer some tranquillity.

The snowpark for the adrenaline junkies and freestyle riders out there. 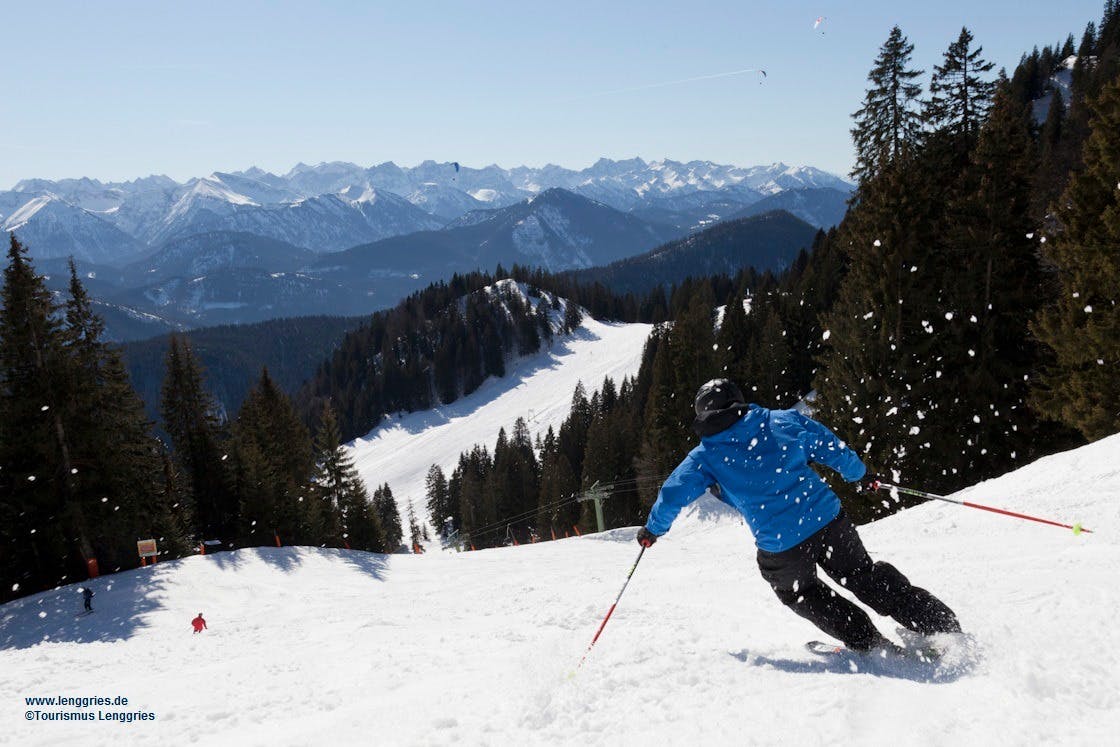 Brauneck is one of Bavaria’s most popular resorts, because it is so close to Munich, but also because it simply oozes Bavarian charm. When you think of traditional Germany, imagine Brauneck. The resort is home to the ski areas of Lenggries and Wegscheid, which have a great variety of slopes for the whole crew. Although the resort is popular and full of character, you can be safe in the fact that there are modern facilities to cater to all guests, with a lot of investment going into the lift systems and snowmaking.

Try the World Cup run and the Waxensteinabfahrt run down to the valley. 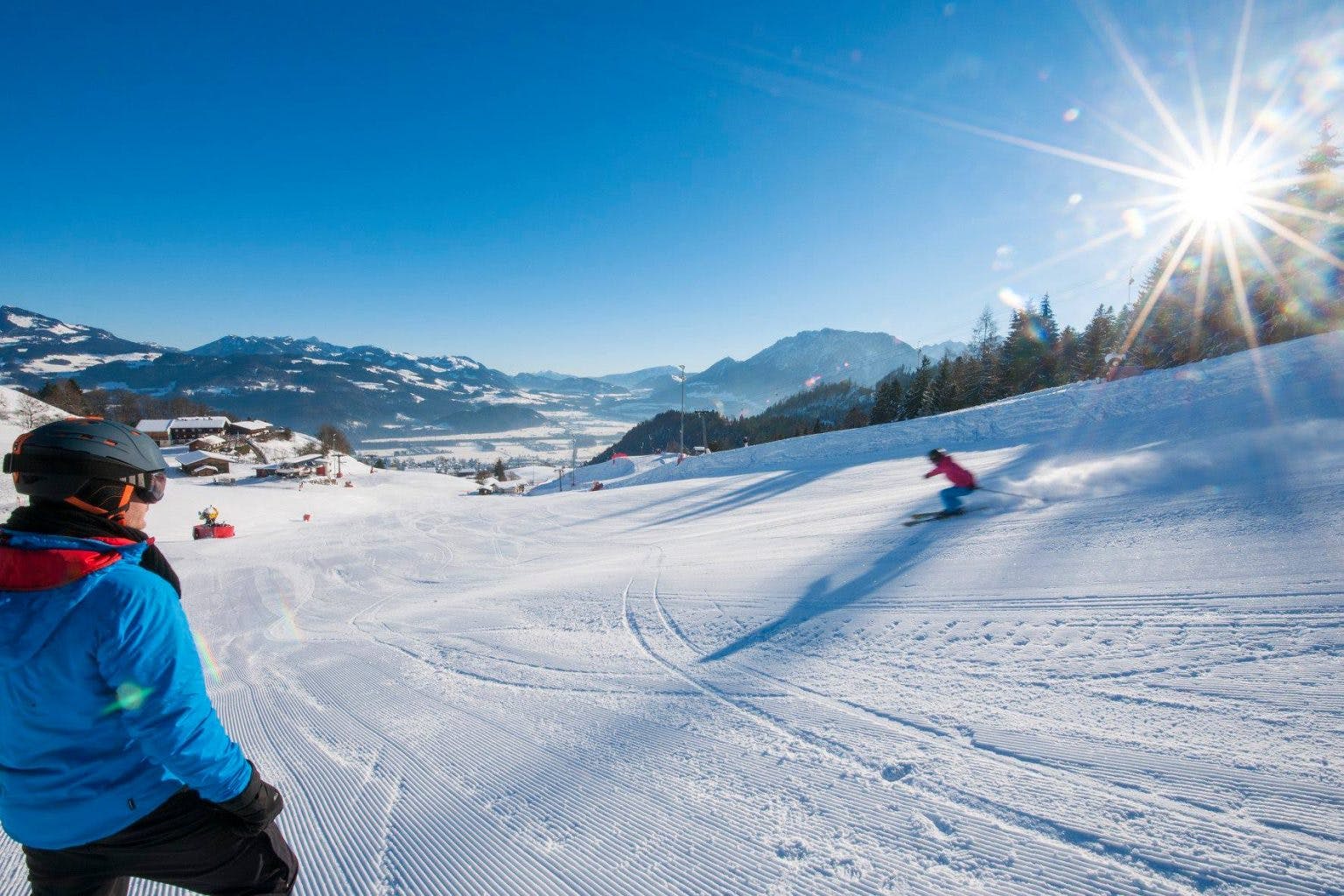 Oberaudorf – Hocheck is a small resort but still has a lot to offer, providing everything you need for a mini-break or day trip from Munich. As it is a fairly low resort, the snow conditions may be temperamental, but this makes it ideal to hit slopes within a couple of hours if there is has been a good layering of the good stuff. This quaint resort is perfect for families, with lots of activities for the kids once they have completed the pistes, such as an epic 3km long Toboggan run.

Stay for an evening and try out the 3km of floodlit slopes open for some magical night skiing.

Ski resorts near Munich-
1 hour and 30 minutes away 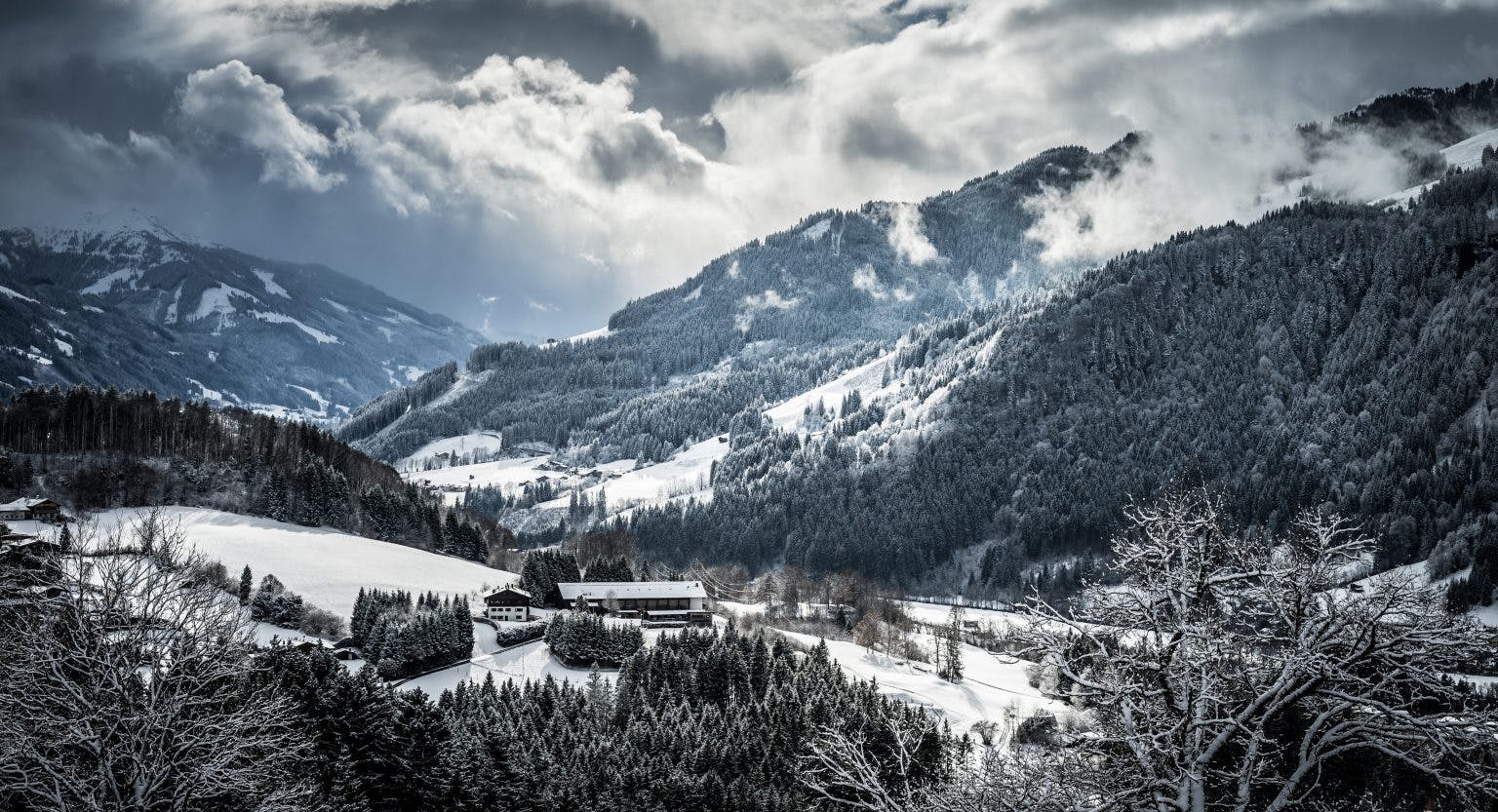 Where: Kitzbühel District in the region of Tyrol, Austria

Kitzbühel is a world-renowned resort and attracts snow lovers from all over the world, and with it being so close to Munich and the airport, it is so easy to experience. This bucket list resort is high-end, a little bit fancy and quite pricey, but this also means top-quality facilities, restaurants and of course apres-ski. There is also amazingly varied terrain and a lot of ski area to have a go at, if you are not too busy wining and dining.

Book here in January for the famous World Cup Men’s Downhill event, the town comes alive even more and this is a historical race. 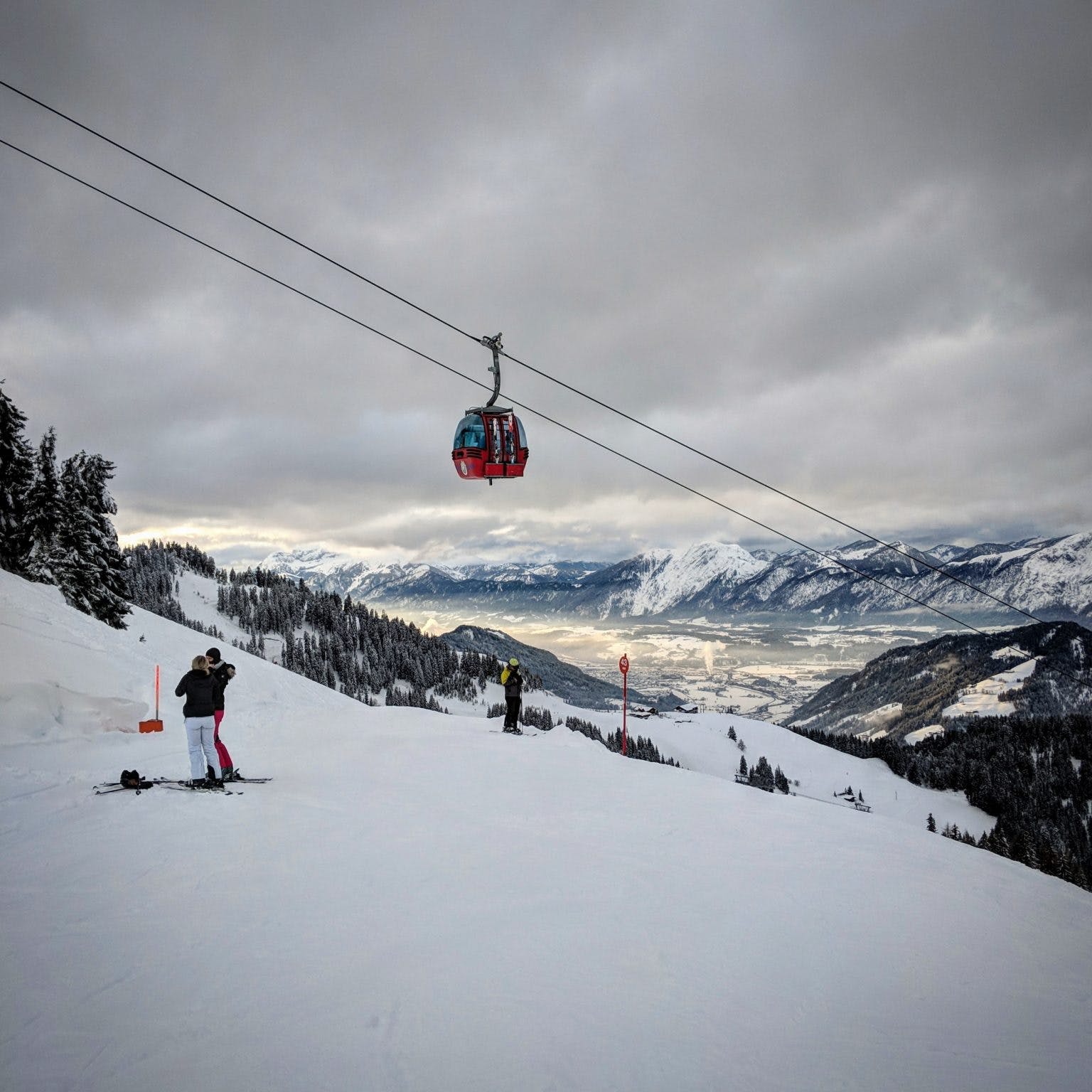 Where: Brixtental Valley in the Kufstein District, Austria

Söll is a charming resort that is part of the epic Ski Welt Wilder Kaiser- Brixental, so you can access the 288km of varied terrain and never-ending slopes. The resort itself is relatively low, but this means that it is surrounded by thick trees, creating ideal protection when the weather comes in. The town is not too expensive compared to other Austrian resorts, so you can still make the most of its lively apres scene and restaurants and not break the bank, win-win!

Söll is well known for its night skiing, with 11km of runs illuminated from Wednesday to Saturday, so make sure to experience the magic of night skiing at least one evening. 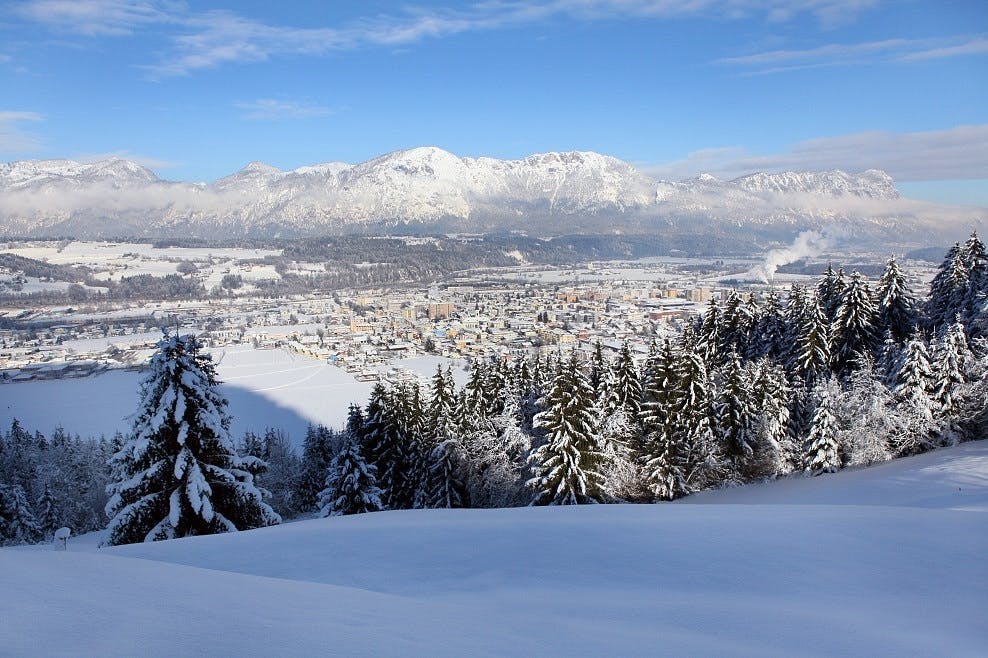 Wörgl is another ski village that is part of the epic Ski Welt Wilder Kaiser – Brixental super ski area in Austria. Having such an incredible ski area within 2 hours of Munich is like a dream come true. Worgl is a Tyrolean town and is rather large compared to many Austrian resorts, so is bustling with a great atmosphere. Although it is not directly on the slopes, it is used as a popular base for many, to access multiple different ski areas in Austria.

Make sure to hire a car as access to the nearest slopes which are at least 10km away from the town centre. 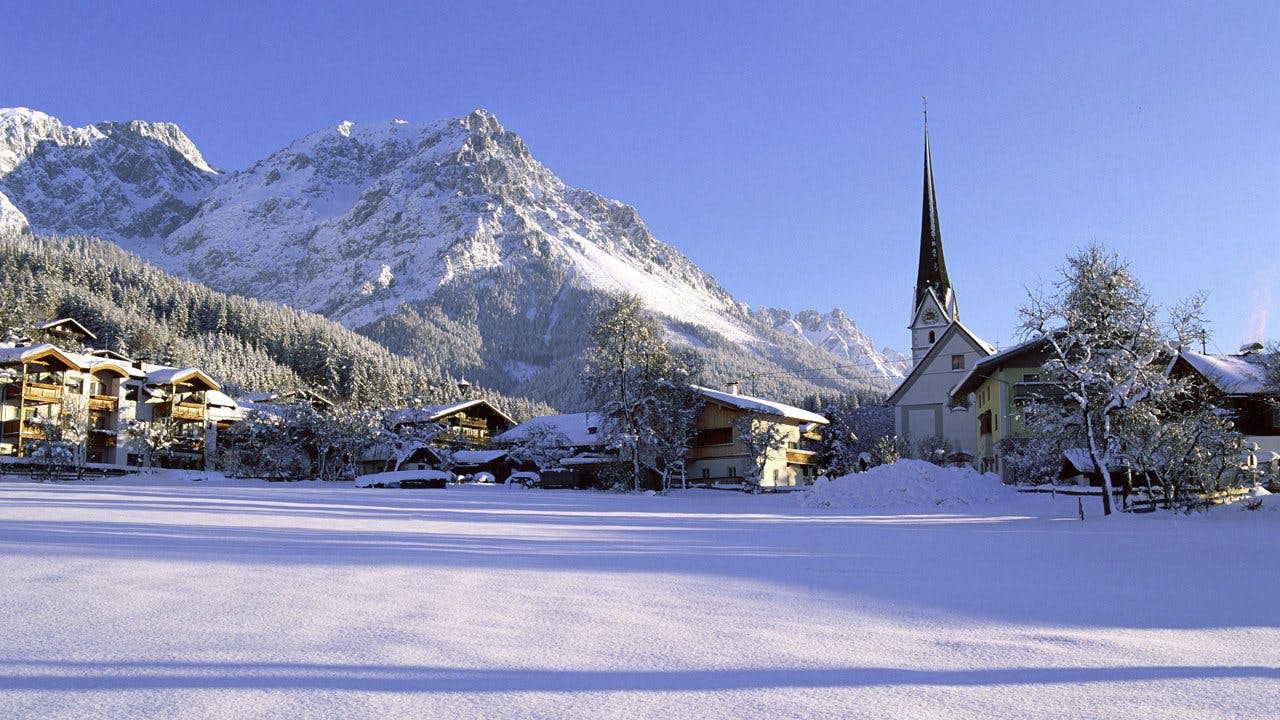 Where: District of Kufstein, Sölllandl, Austria

Another resort under 90 minutes of Munich that is easy access to the Ski Welt Wilder Kaiser- Brixental ski area. Just 2.1km from the village centre are the lifts to some of Austria’s best skiing, so this is an ideal location for those wanting to spend more time on the slopes than off. The local slopes of Scheffau are based in a snow bowl, so are famously well covered and remain in good condition. But we would recommend spending a little time in the village, compared to its party sister resort Soll, it is a quaint centre that is said to the prettiest in the area. Expect Alpine-style buildings and rustic cuisine to warm you up after a big day tackling the abundance of slopes.

If you want to try the nearby ski areas or the snow is temperamental, make sure to buy the Kiztbüheler Alpen Ski Pass to have access to an abundance of resorts. 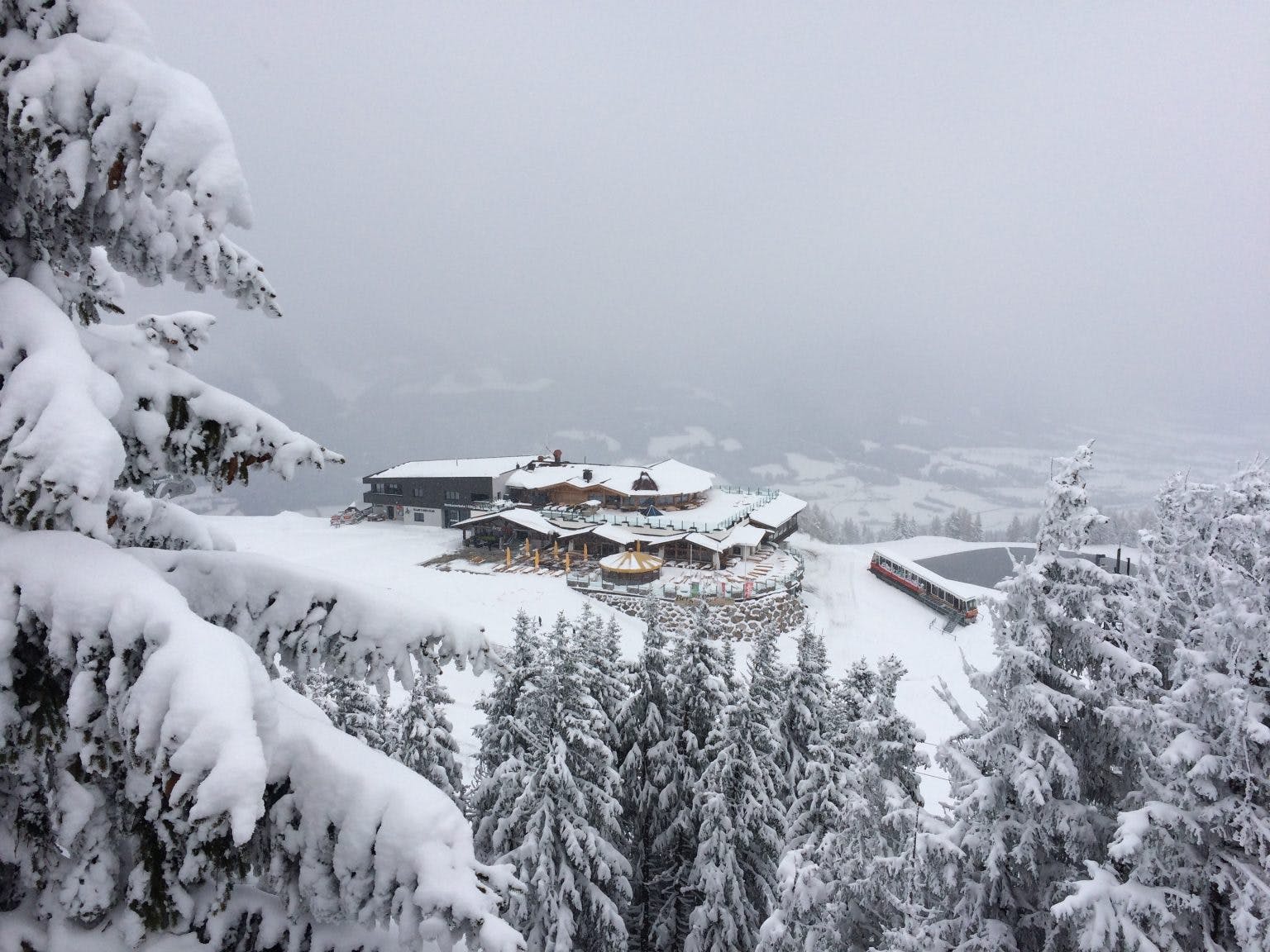 Where: Wilder Kaiser region in the Tyrol, Austria

Ellmau is lucky enough to be super close to Munich and the airport, whilst also being another village with access to Ski Welt Wilder Kaiser- Brixental ski area. Ellmau itself is a picturesque village, with a beautiful alpine church at its centre, creating a lovely cosy atmosphere. It’s also popular as a family resort, with lots of amenities for all ages, but you may find you will be so occupied on the slopes, you probably won’t have much time to experience much else.

Head to the Alpeniglu-Dorf igloo village in Hochbrixen, for a perfect winter tourist attraction. 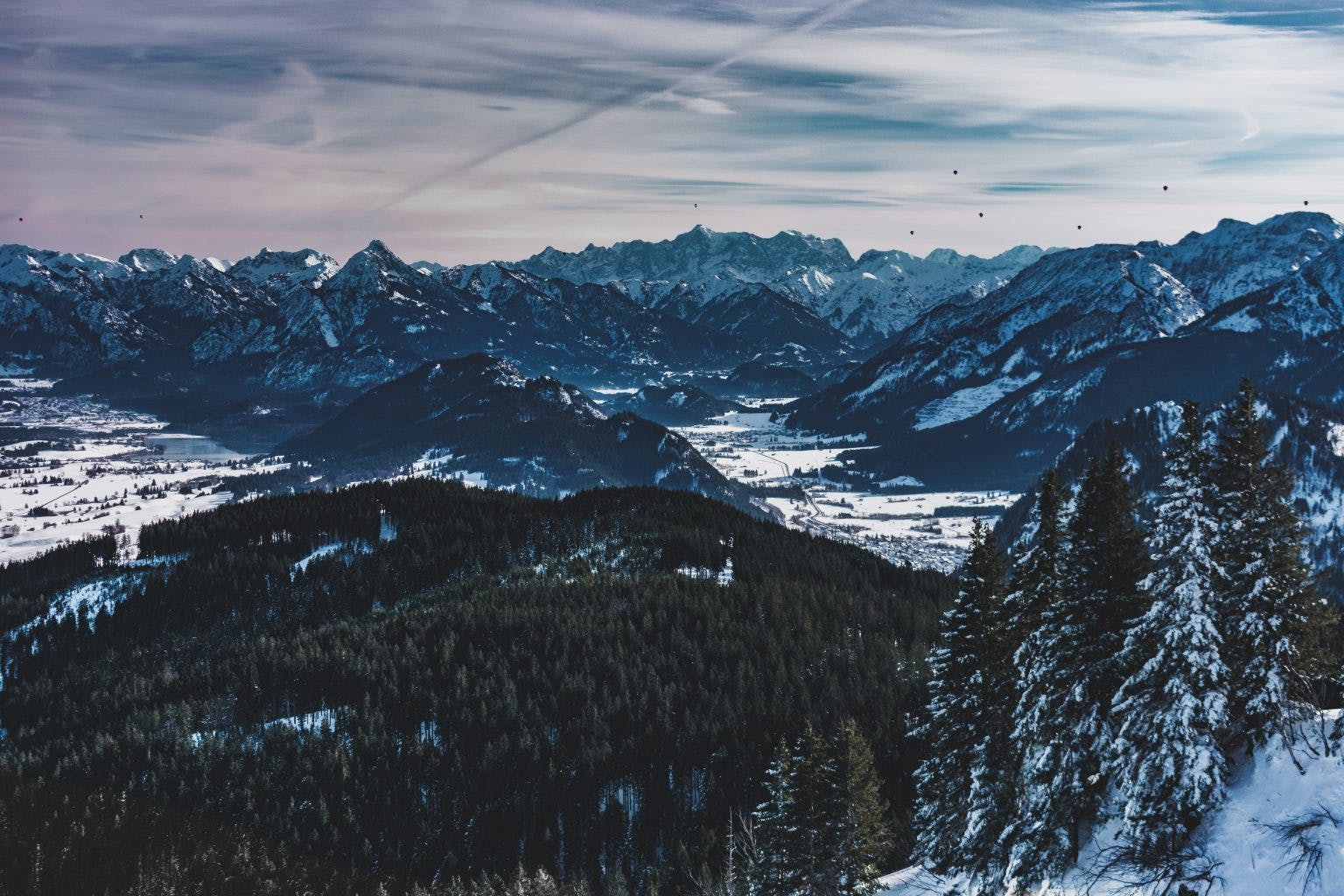 Nesselwang is not the largest resort there is in Germany or the surrounding Alps, but it is a must-visit spot for its traditional Bavarian style. You can easily visit as a day trip from Munich or whilst road tripping the resorts in Bavaria, and it’s worth the stop for the snowpark and the awesome views. Although it’s not a high resort, it does have an impressive 2004 ft of vertical ascent!

Nesselwang has one of the best snowparks in Germany, so is on the bucket list for park riders. 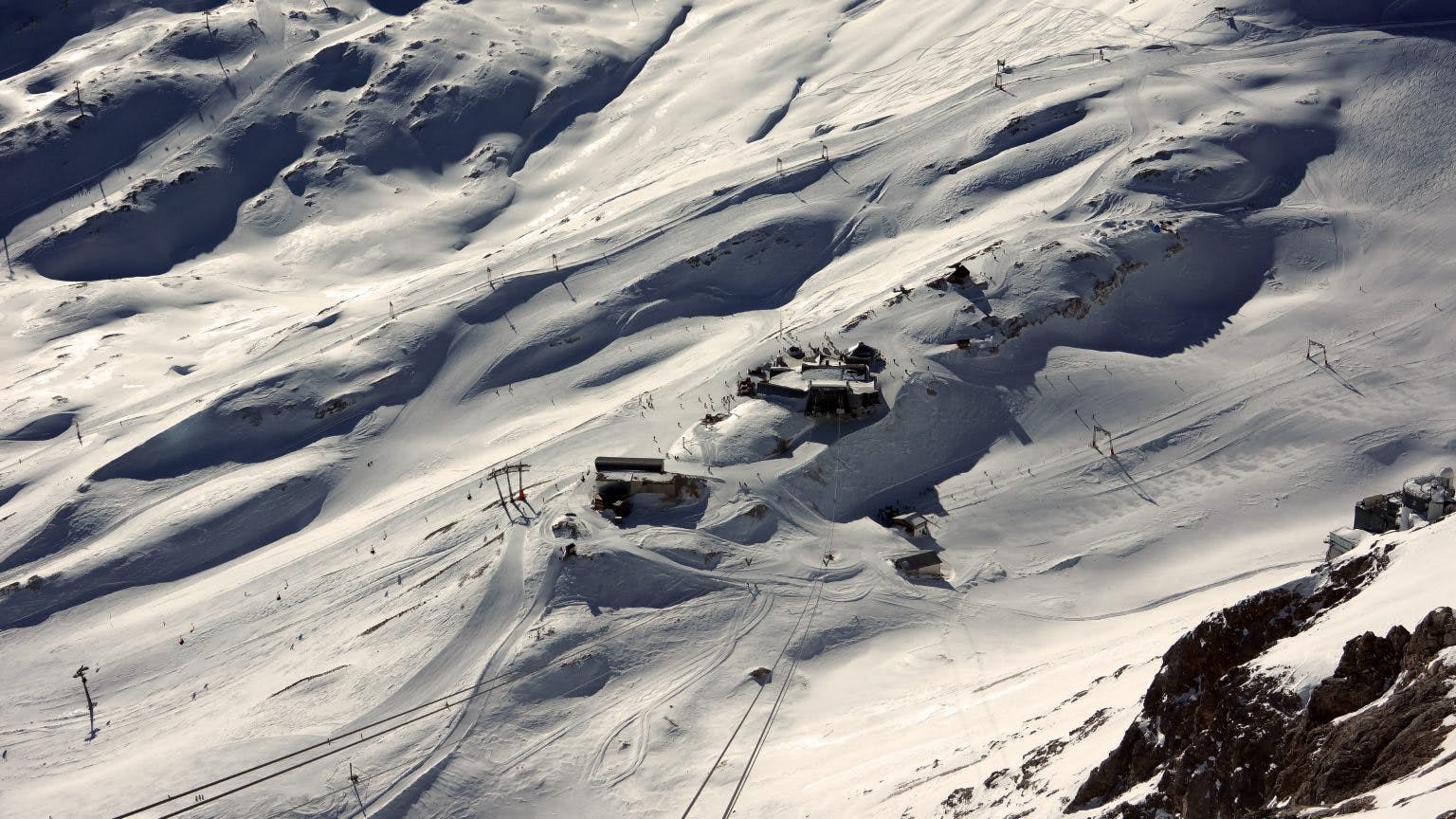 Under 2 hours from Munich, you can be at one of Germany’s most epic resorts. Why is it so epic? For a start, it is home to Germany’s highest mountain reaching 3000m, and you can actually ski above the treeline (and feel like you’re above the clouds) at 2720m. Other than the awesome views this mountain brings, it also means that is one of the most snowsure resorts in the area. Expect lots of snow and a long season, especially on the Schneeferner glacier. The slopes are an intermediates heaven, with red runs galore, but for those looking for a challenge, there is plenty of freeriding to be done.

If you aren’t afraid of heights, head up to the AlpspiX viewing platform, which is two ‘floating’ platforms sticking out from the mountain and experience the incredible views of the Höllental valley.

So there we have 10 epic ski resorts and mountain villages all within 2 hours of Munich city. The options for good resorts are endless and they all have a certain charm or lure that caters to all kinds of snow enthusiasts. You can jump in the car or hop on a bus for a big boozy weekend with lots of skiing and lots of apres in Austria, or go for a last-minute trip with the family because of good snow. Whatever your reasoning to head to the mountains, from Munich you can be enjoying your winter sport as quick as your Monday morning commute. 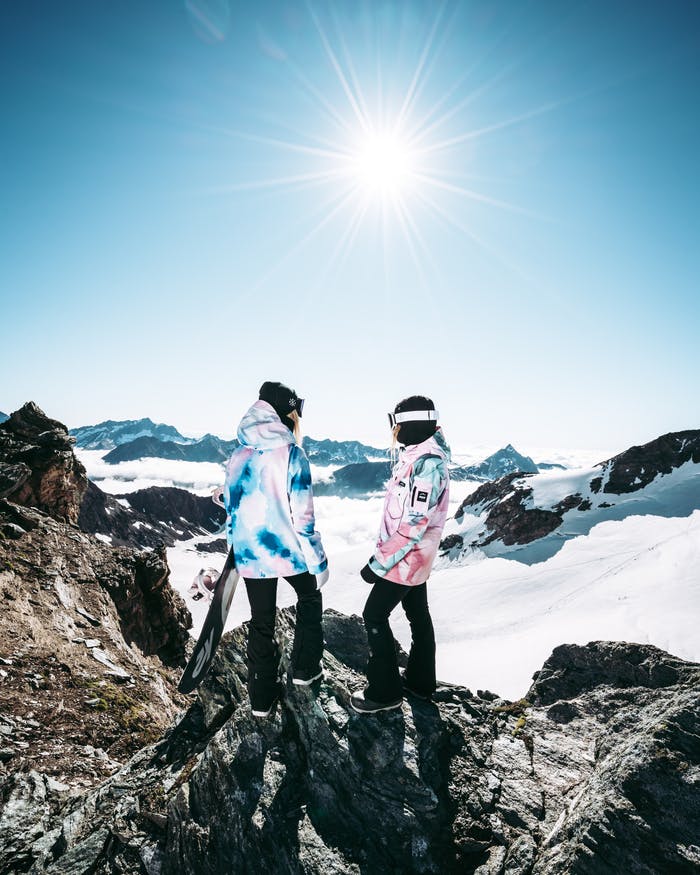 Hey Riders, note from your gal Angelica here. All information was correct at the time of writing through research and extensive knowledge and experience. However, things change during different periods in the season and some websites offer out of date information and links may change.

Maybe you have some better information to offer or any addendum or changes to make, in which case, feel free to email me on angelica@ridestore.com, and we can consider adding them in! Let me know. . .