It's an age-old question for snowsports lovers, what's easier, skiing or snowboarding? It's a difficult question to answer, almost as tough as the concept of which is cooler between skiing and snowboarding.

The question itself is a surprisingly existential one to unravel, depending on whether you compare beginners' experiences, for example. How much are you aching at the end of the day after trying skis or snowboards versus what a pro might think?

But we thought it would be good to compile a little report on which sport is easier to start with, improve with and master.

So let's dive in and see what our crew of experts think.

What to expect during your beginner lessons? 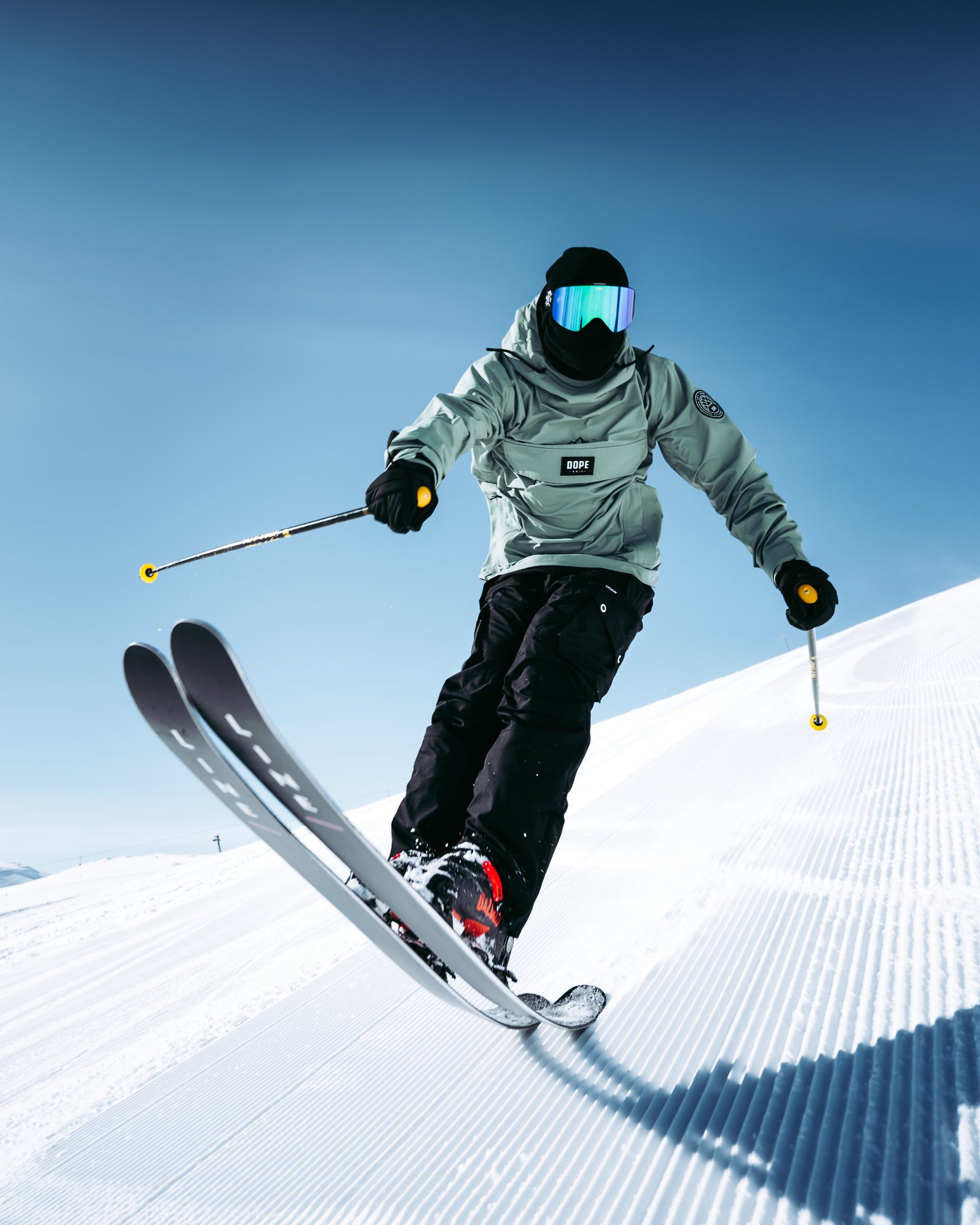 During your first week of learning, you’ll have mad fun. Heck, if you are like most people, you’ll pick up the basics pretty fast. After your first session, you’ll be able to do some turns on the beginner slopes. And by the end of the first week, your skill will have grown to intermediate/blue slope level. What it might make it easier to learn is the fact that your legs are separate. As such, on beginner slopes (low speeds), you can always regain your balance by throwing out one leg. It’s like learning how to walk, but with skis. 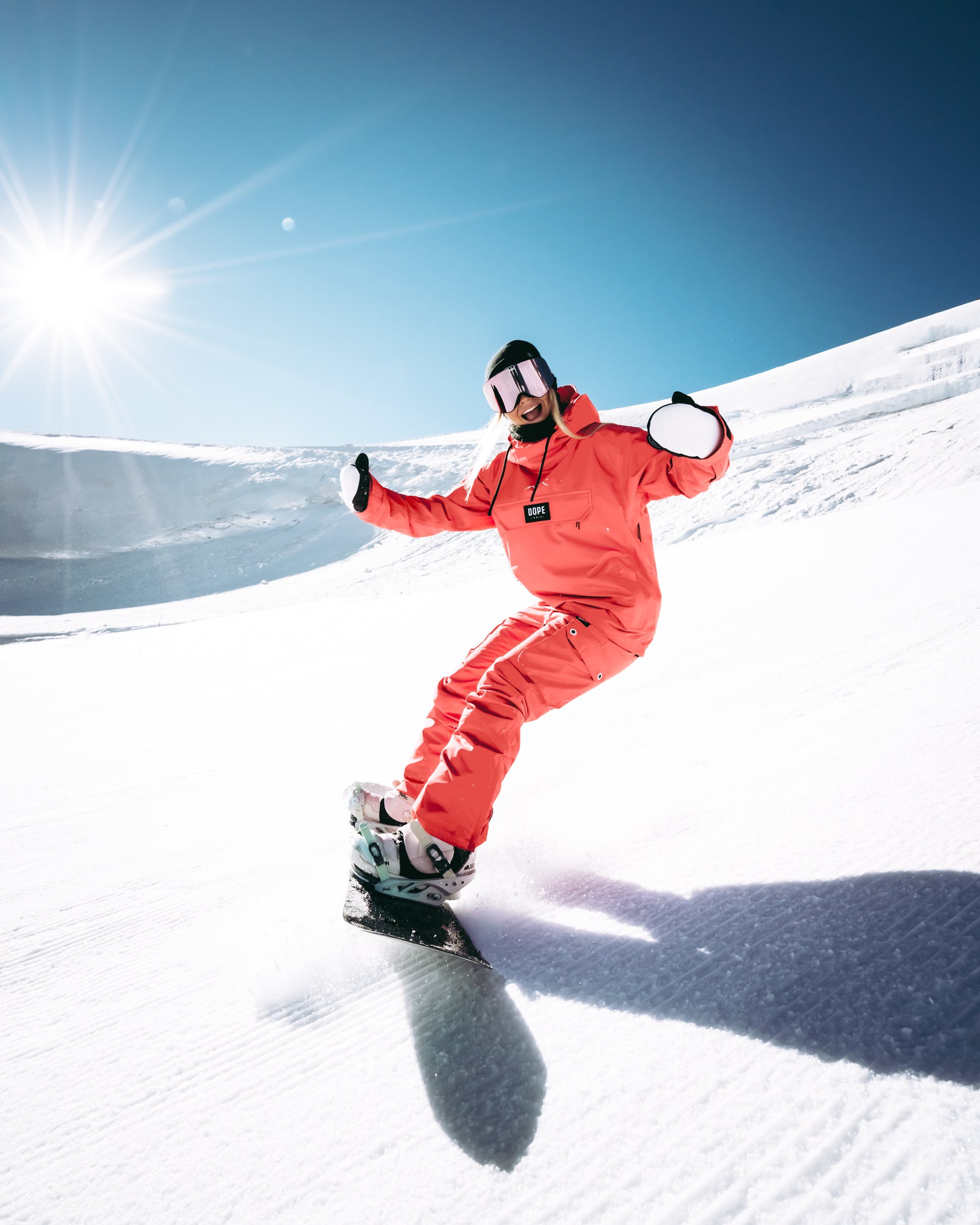 With snowboarding, things are a little different. During your first 3 sessions, you should be prepared to fall- a lot. You’ll feel like snowboarding is not the sport for you. With every tumble, you’ll get closer and closer to calling it quits. But before you do, encourage yourself to take one more try, and another, and another until you finally have it right. There’s always light at the end of the dark tunnel. For most people, it takes a couple of days before it clicks and they start making real progress.

As you prepare for your first sessions, invest in some padding. These will cushion and keep you safe during the falls. You can get protective shorts, sporting pads for the sides and back, and some kneepads.

But why is it harder though? Well, snowboarding requires that you keep your feet stays attached to a board. This is restrictive and awkward at first, but you will get a hang of it. Also, snowboarding is done sideways. This means that snowboarders have restricted peripheral vision (about 50%), and it takes some time to get used to. 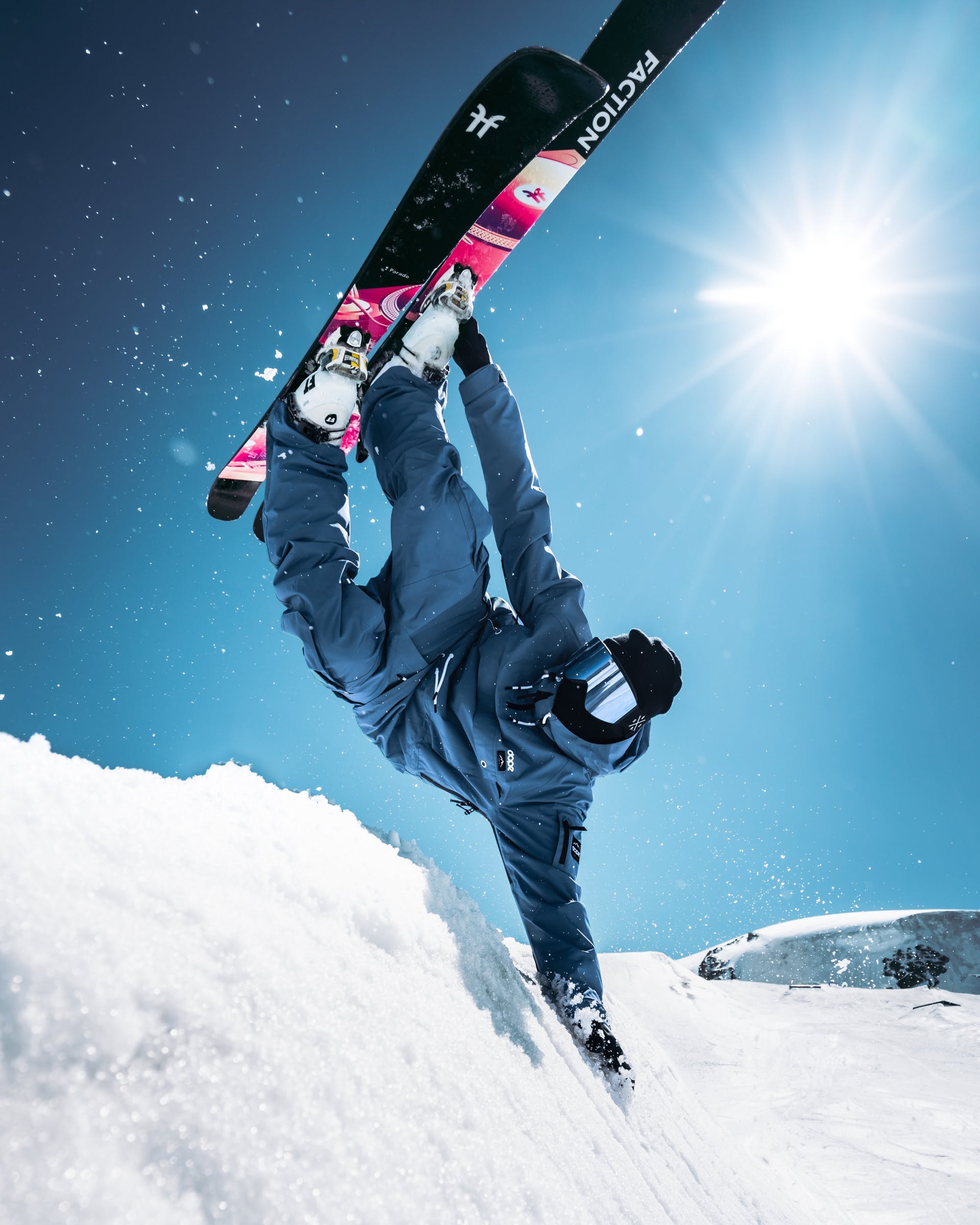 For beginner skiers, the real work starts after the first or second session (call it the honeymoon phase). And usually, building on the basic skill set may take a while. Here’s why. Initially, having your legs separate is a plus. It affords you balance and all. However, it becomes a problem when you need to learn how to coordinate your legs – move them in harmony and symmetry. It takes quite some time to master this.

Once a snowboarder overcomes the obstacles we mentioned in the honeymoon phase, progress is seen. What was initially an obstacle of progress turns into an advantage. With snowboarding, what you learn in the beginner stages doesn’t change. The basics remain the same even in the expert levels. So once you get used to the awkwardness of having your feet attached to a snowboard, you are in the clear. All that’s needed now is to improve on balance, and increase speed. 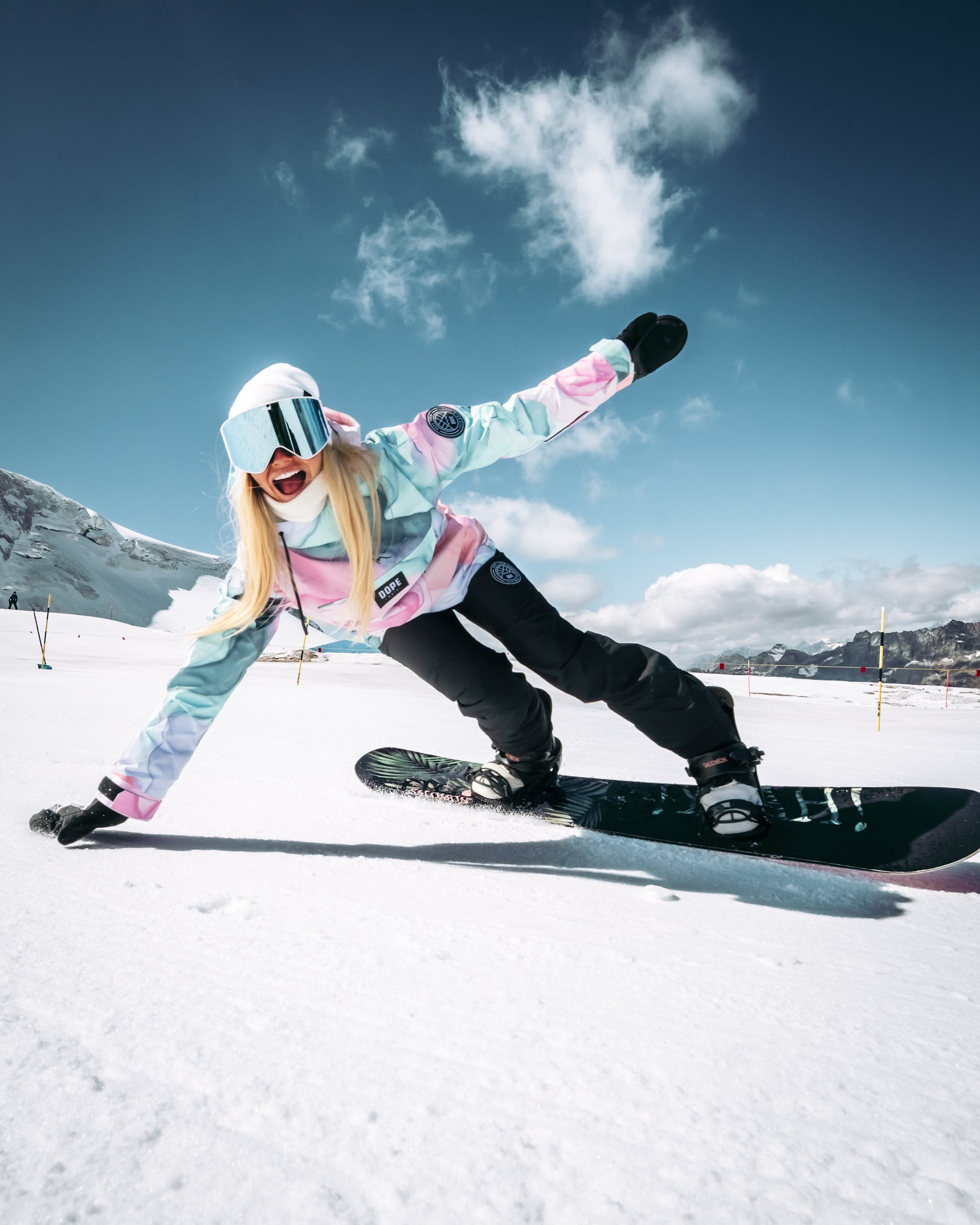 Whether you’ll choose the skis or the board, you’ll need to be very fit. For starters, skiing takes a toll on the thighs and legs while snowboarding requires a little more core strength in comparison since the upper body is involved in the balancing and turning. Below are some recommendations for snowboarding and skiing exercises:

Cycling is one of the best options. This is because it helps to strengthen the legs and has less impact on the joints and knees compared to running.

Exercises that build core strength by focusing on the lower back and abdominal muscles are recommended. These include pilates, paddle boarding, and simple crunches.

Note that since there are a bit of falls involved in learning this skill, you better be in great physical health, lest you won’t make it through the first week. 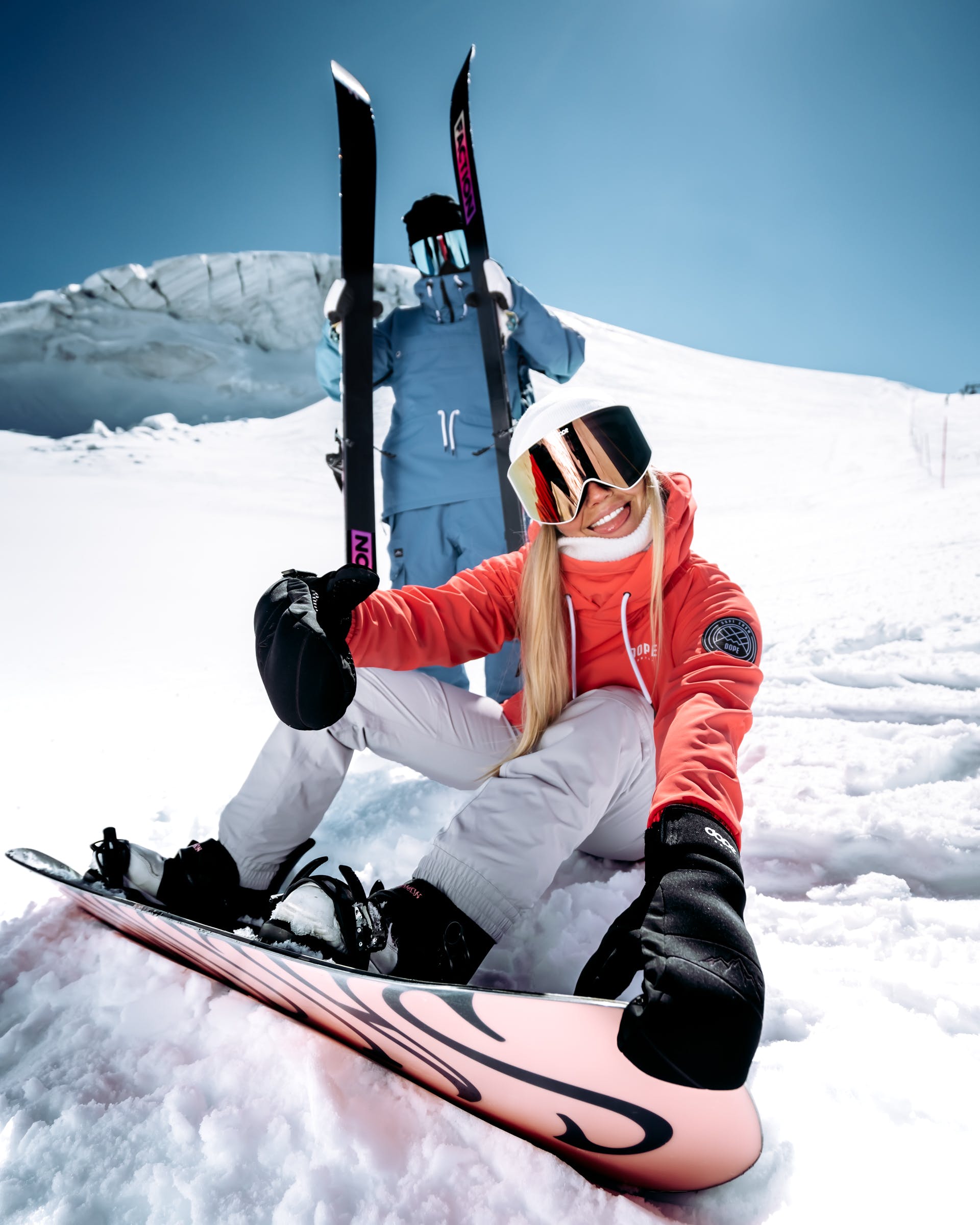 With regards to comfort, snowboarding is the winner – there’s no doubt about that.

Ski boots are by far one of the most uncomfortable boots ever. Walking around town in them is a pain.

Snowboard boots are made softer, which makes them easy and comfortable to walk in. And lastly, when snowboarding, all you need to carry is your snowboard. Snowboard jackets are normally slightly longer than ski jackets and snowboard pants tend to be baggier than ski pants, leading to more comfort and extra protection to the rear when falling or resting up while attached to your board. However, there is no reason why you can’t wear a snowboard jacket skiiing and vice-versa. Styles change yearly, making both versions in some cases indentical.

When can you off-piste 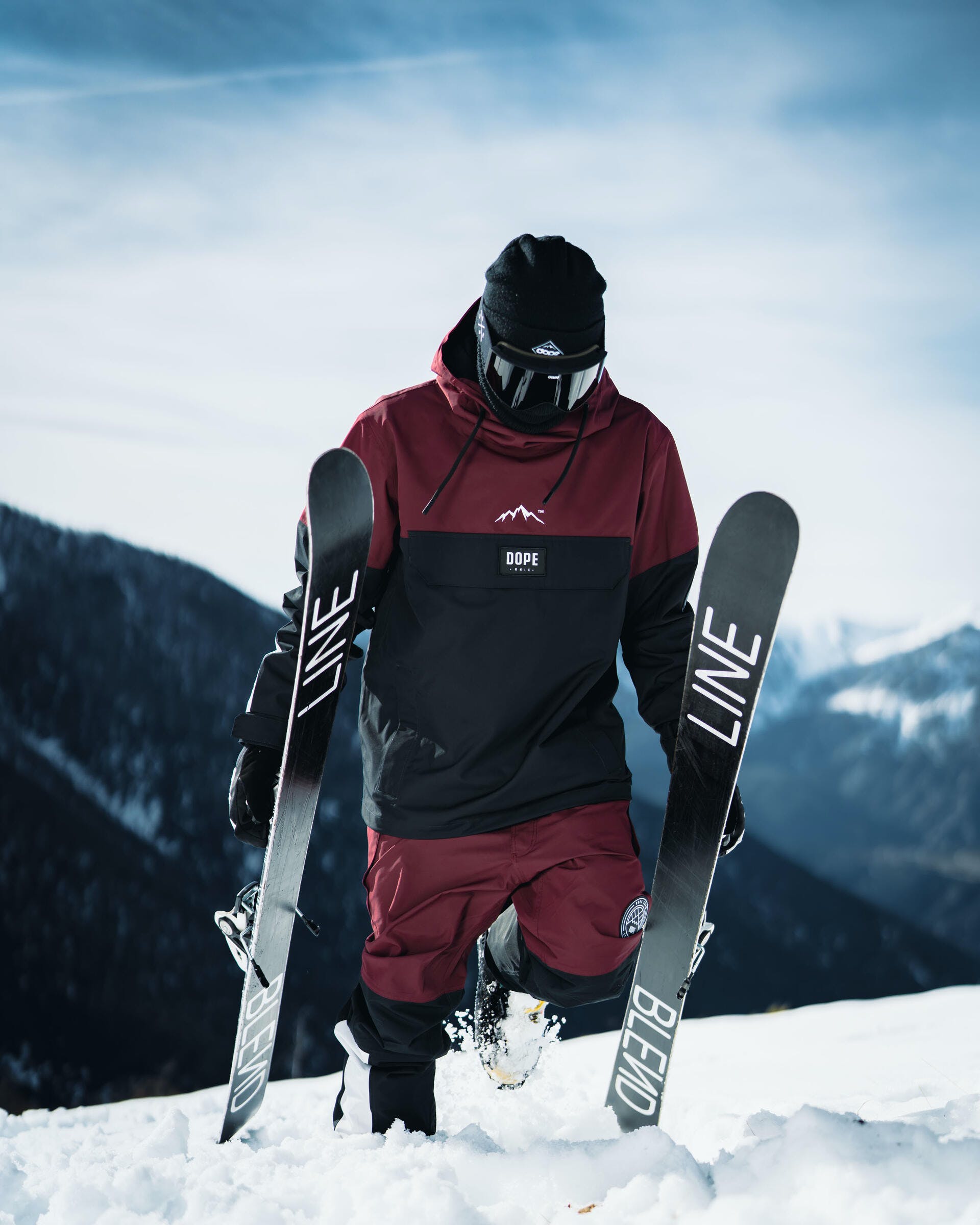 Off-piste simply means riding on untouched snow. The techniques are slightly different when off-piste than on-piste. Regardless of whether you are snowboarding or skiing, enjoying off-piste sports can be dangerous.

You shouldn’t dare go off-piste before you become a master and confident in your skills. There’s a reason why off-piste slopes are only recommended for expert skiers.

Given the basic nature of snowboarding techniques, you can go off-piste as an intermediate snowboarder. But even then, you need to be super confident with your skills.

What can you actually do on skis or a snowboard? 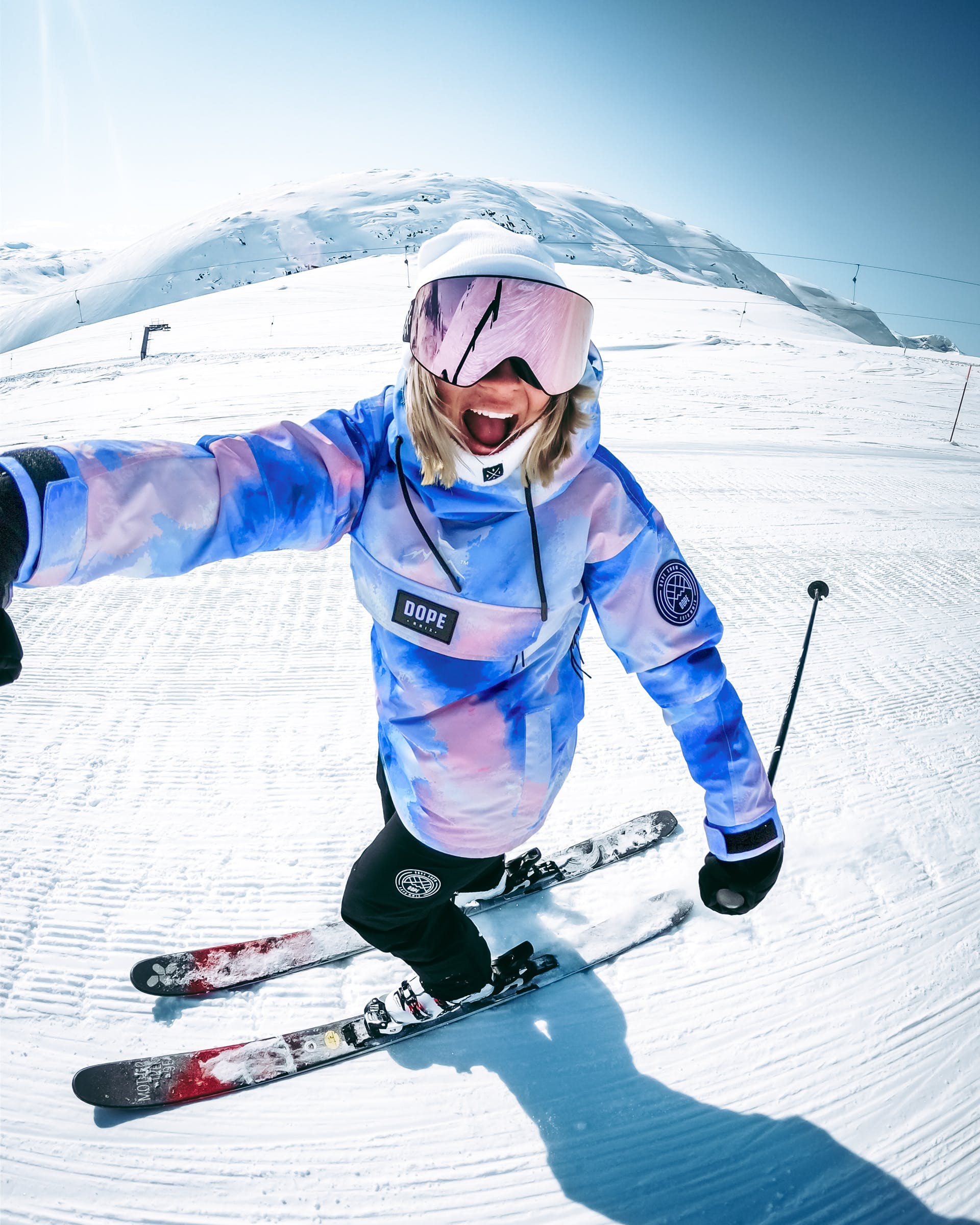 The tricks you can pull on a snowboard or a ski are limited to your skill level. However, before you even start being creative, you should start with the basics. For skiers, basic tricks include springing and Ollie. Springing is the first technique every beginner should learn. It’s easy to balance. Ollie, on the other hand, is slightly challenging but when you perfect it, you can maximize on distance, time and height.

As for snowboarding, you first need to learn how to jump before proceeding to slightly difficult tricks, including wheelies, and Air to Fakie. 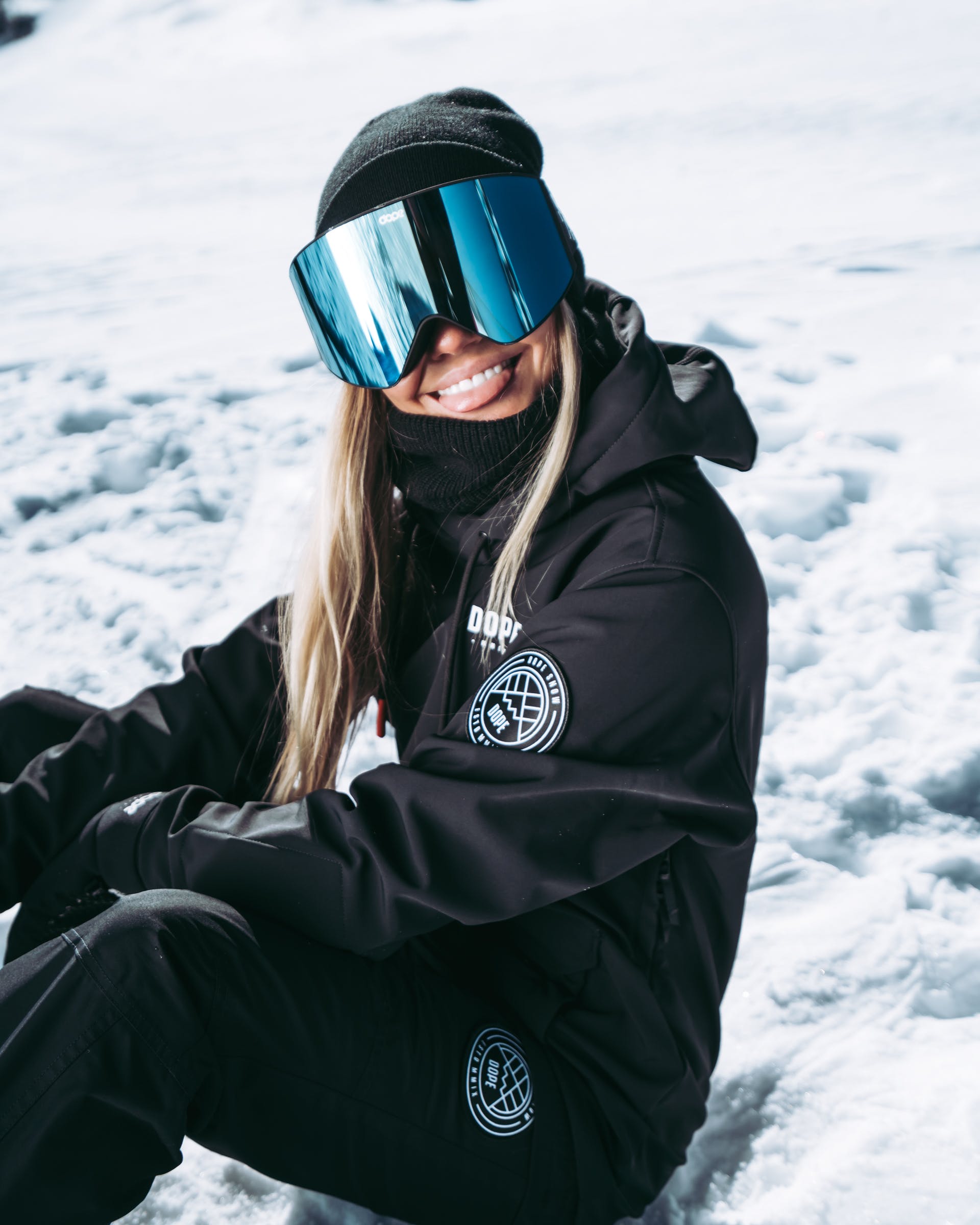 Although having your feet apart and independent gives you balance, it also makes it easier to fall when trying to do some tricks. It also increases the risk of injury sustained during twisting motions. Moreover, it is hard on the knees.

With both feet attached to a board, you’ll experience more injuries when starting out (we’ve pointed this out at the start). Some of the common injuries include shoulder, ankle and wrist injuries. 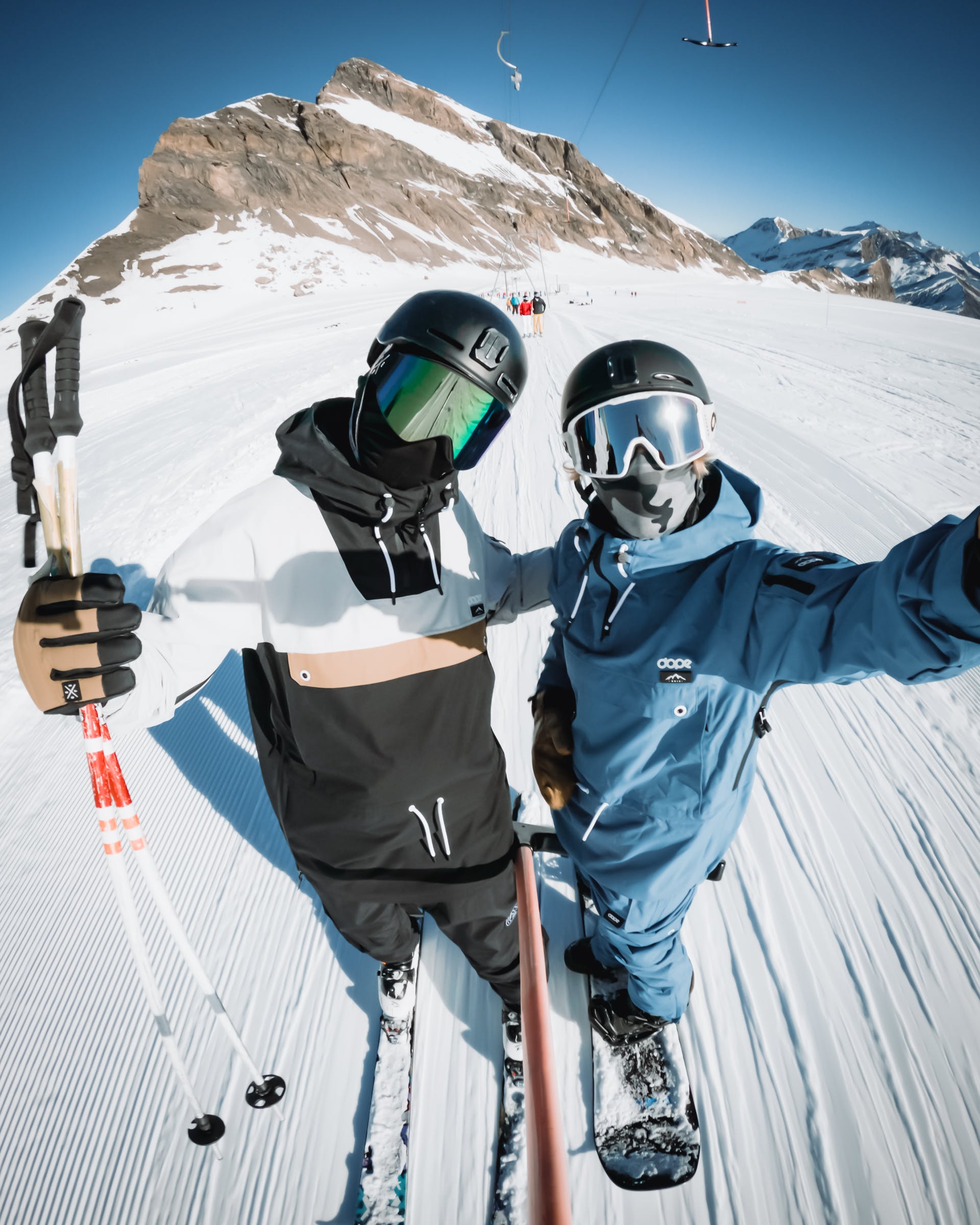 While lifts can be scary for newbie skiers, the skis don’t have to be unclipped when on the lift. Also, facing forward tends to make the experience comfortable in comparison to snowboarding.

Ski lifts prove to be challenging for snowboarders since they need you to ride the lift with one foot unclipped. What’s worse, they don’t have a pair of ski poles to help get off the lift. As such, they have to learn how to ride with one foot.

Is there a supposedly "cool" factor to consider?

The differences in style 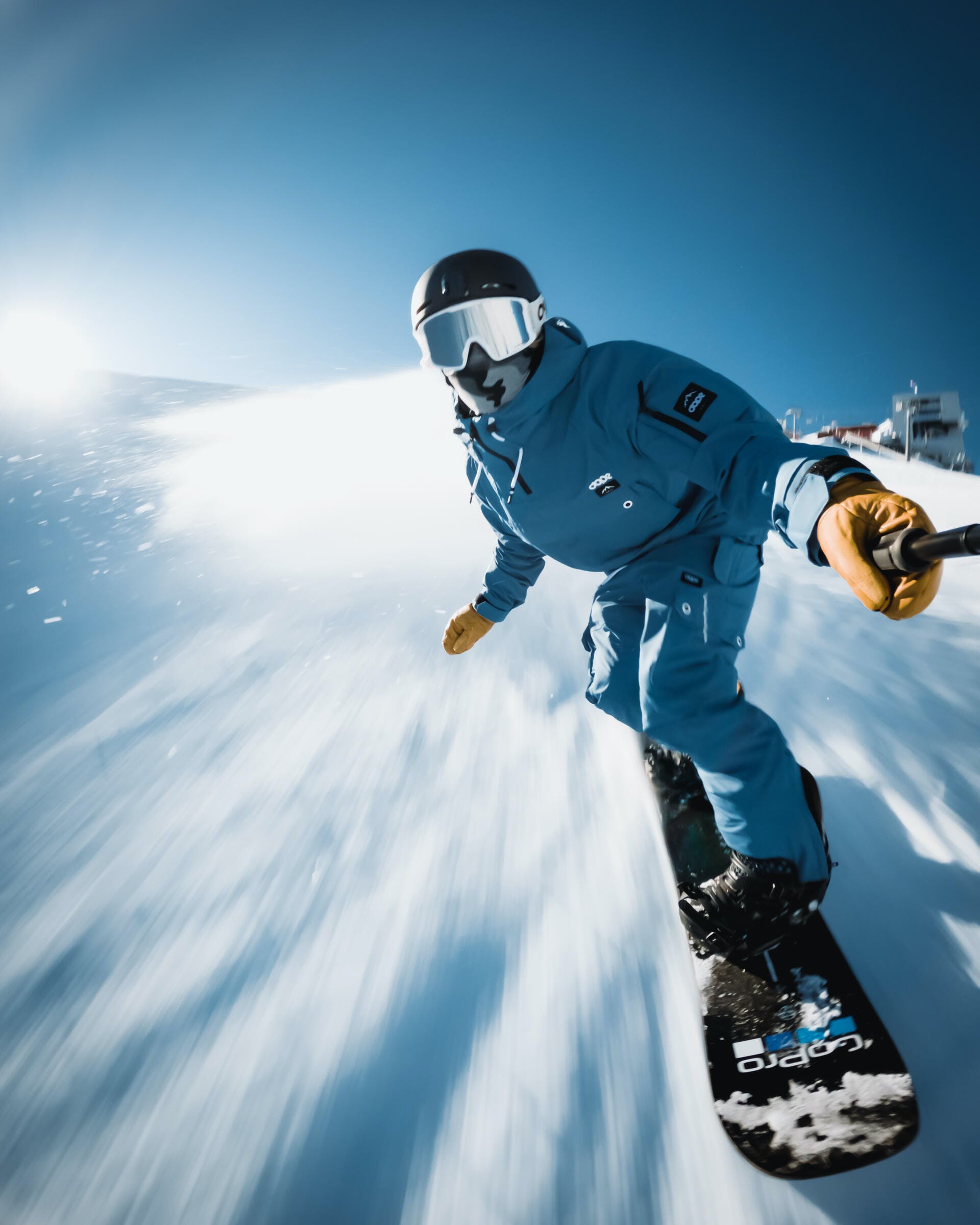 But besides these, there are other styles, including;

Snowboarding – this has many styles used for both professional and recreational boarding. These styles include:

The differences in lingo

Even though these two snow sports have similar lingo, some words have different meanings. For instance, the word Switch means skiing backward in skiing and in snowboarding, it simply means changing the lead foot. So, if you usually ride with the right foot in front, you change it to the left.

But generally, words are the same for both snow sports. This means that learning the lingo for one sport covers you for both sports.

What’s your ski or snowboard personality? 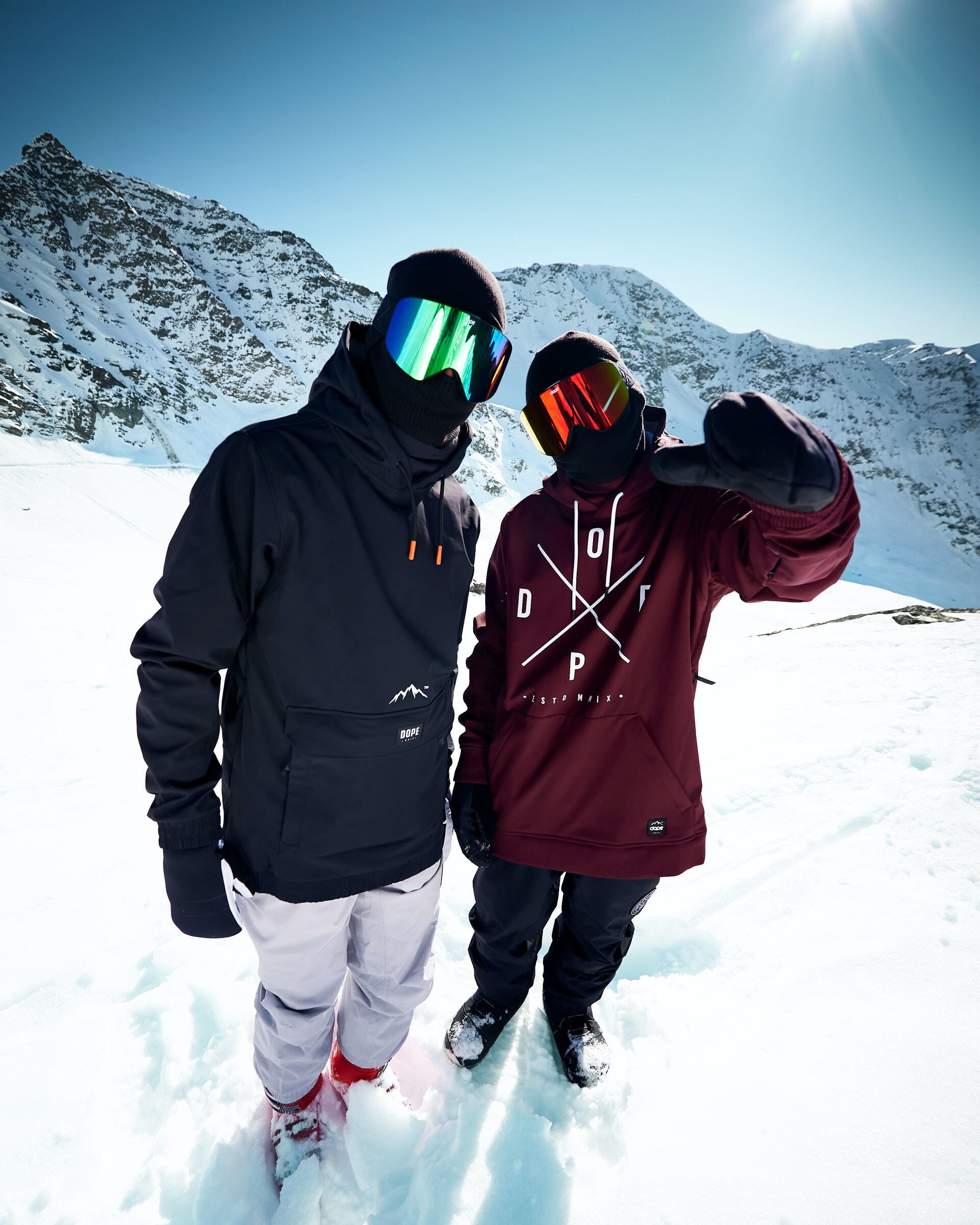 Resorts are always full of wonderful and weird people who love sliding down the snowy slopes on the mountain. Before you dive into any of the two sports, you should seek to determine your personality. Here are some of them:

The 80’s Dude – this guy looks mighty and radical in his cool 1-piece suit. He is not about to ditch his 80’s neons soon

The Gear Head – this guy is ready for any situation the slopes throw at him. His cameras know no bounds

The Snow Bunny – she looks better suited for the space behind the makeup counter at the department store in town. However, don’t let these looks deceive you. She will tear you to shreds. On the slopes, there’s nothing like a boyfriend

The rocker – this one is easy to spot from a far distance. He is always jamming to his sick tunes.

Ski vs snowboard: which is more addictive?

For most people, snow sports are addictive. Both skiers and snowboarders look forward to snow holidays in the snowy mountains. And regardless of which sport you choose, when you move past the beginner stage, consider yourself hooked. You’ll want nothing else than to keep at it until you are a pro.

Already made a choice?

At this point, you’ve probably made a choice of which snow sport you prefer. But before you dive in head first, it’s important that you look for a great instructor course to get you started and master the basic. Having someone hold your hand makes the process a lot easier. 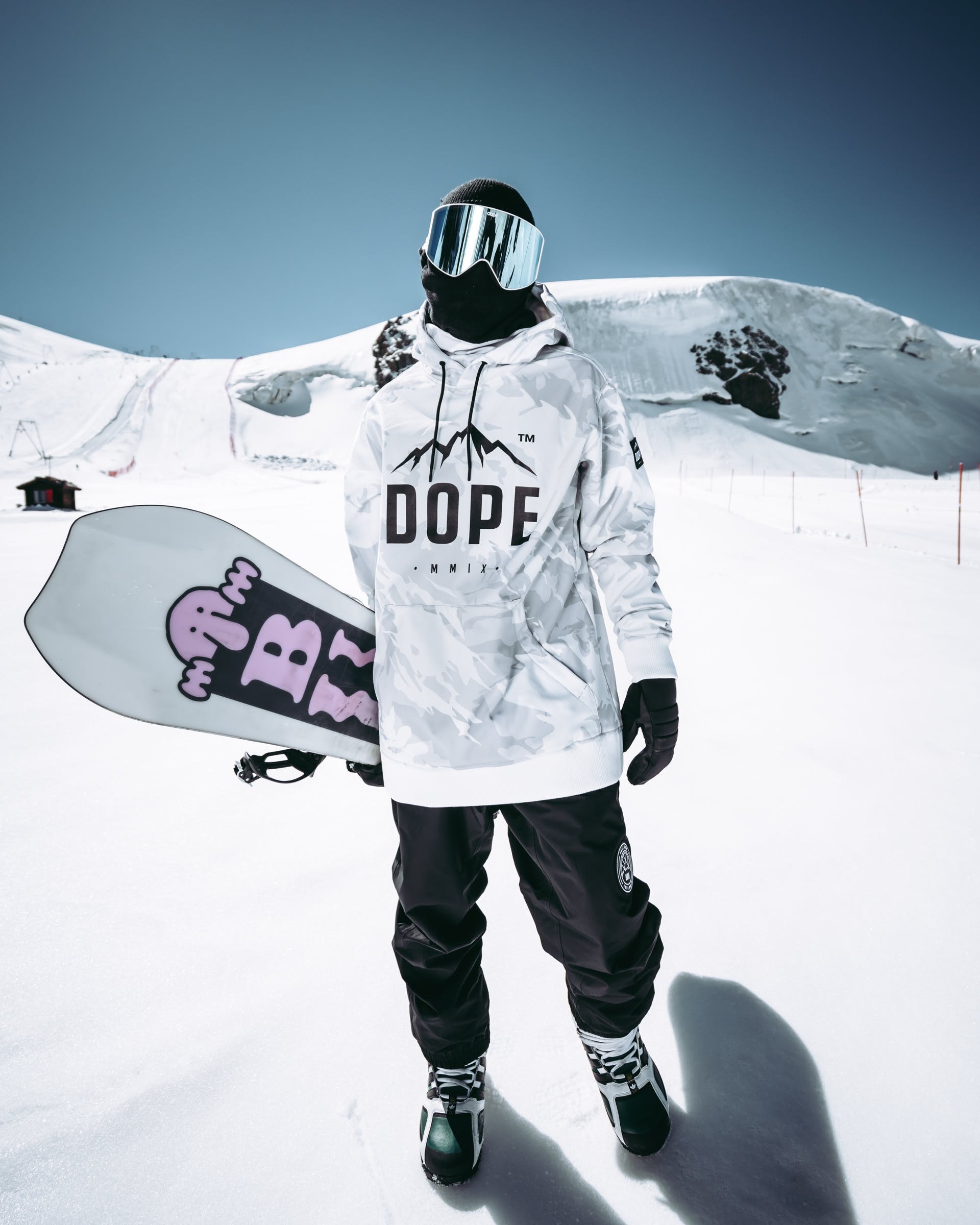